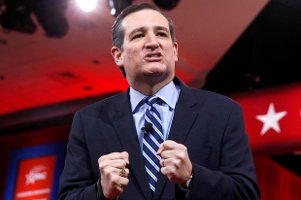 In Iowa, the Cruz campaign sent out tweets saying Ben Carson was suspending his campaign. That was false. The campaign put out flyers accusing people of voting violations. That was false. In South Carolina, a Cruz super PAC attacked Trump over the Confederate flag and your then communications director posted a link this week accusing Rubio of disrespecting the bible. That was false.

Wallace was holding Cruz to the truth about his campaign utilizing dirty tricks to collect votes and Cruz lost it. Cruz snidely snapped at Wallace. Cruz’s sneeringly swarmy attitude has not sat well with the voters as evidenced by the current polls reflecting Trump hugely ahead of the remaining candidates, especially Cruz.