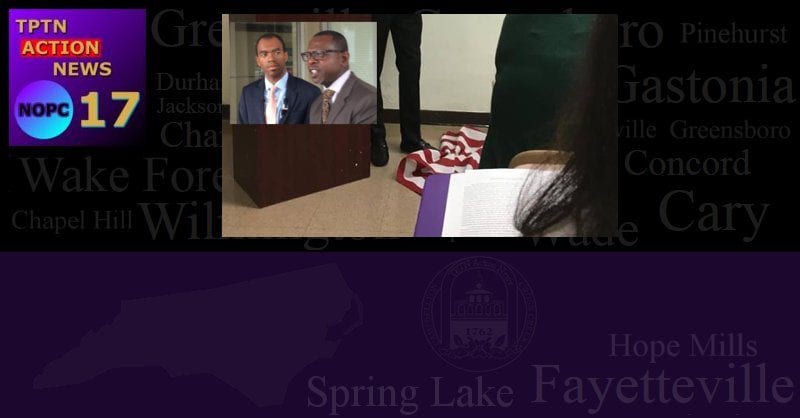 Ferris Lee Francis and his attorney, Allen Rogers [noted for being arrested in 2004 for Felony Cocaine and Marijuana Possession] received notice that Cumberland County Superintendent Frank Till has recommended that Francis, the Cumberland County teacher who caused an uproar after stomping on the American flag during an alleged lesson on free speech, serve a ten day suspension without pay.

However it is still possible that the Cumberland County School Board will reject this recommendation in favor of termination of Francis’ employment in light of the danger that Francis placed the students of Massey Hill School by even attempting to set fire to a U.S. flag within the confines of a class room full of students with no safety precautions in place. Especially in light of Francis’ total lack of remorse and militant attitude about the whole issue.

There is certainly solid precedence for such a termination. In May of 2015 a teacher in eastern Illinois was fired for stepping on a small U.S. flag during a lesson on free speech. The Martinsville School District board voted 6-0 to fire English teacher Jordan Parmenter. Martinsville is about 80 miles southeast of Champaign near the Indiana state line. The district had placed Parmenter on leave after the May 15 incident. Parmenter has said he used the flag as a pointer during a lesson on free speech at Martinsville Junior-Senior High School. A student complained that the teacher was being disrespectful, and Parmenter said he then stepped on the flag as an example of free speech. So there is certainly clear and precise precedent for the termination of such disrespectful activist teachers.

Francis said he grabbed a flag from a storage closet and asked the students if they had a lighter or pair of safety scissors. While Francis said the questions were posed facetiously, the parents of the sons and daughters are not prepared to accept this in light of the fact that several students have already stated that Francis had to be told by the students themselves that they were not allowed to be in school with lighters and sharp objects  unsupervised. A policy that Francis reasonably should have known already but clearly didn’t.

Alex Dunn, the real hero in this sordid affair, grabbed his phone and snapped a photo – a photo that would eventually go viral on Facebook. A photo that ousted Francis and his radical indoctrination efforts from the shadows and into the light. Then, showing a strength and determination that far surpassed that of Francis, Alex rose from his seat, reverently picked up the flag stopping Francis cold and took the defiled banner to the principal’s office. It was in that moment that all the students present learned a very important lesson set by Alex’s example that will stay with them all their lives. Those students will forever remember how Alex’s example far overshadowed Francis’ attempts to indoctrinate them with socialist liberal hate and a radical ideology. By Alex Dunn’s example we have all learned the very important lesson of standing up to these radical liberals and their nonsense. If a high school student can do it, can we as adults do any less?

The most concerning aspect of this situation is that Francis clearly does not understand that he has done wrong and shows absolutely no remorse regarding his actions. “I don’t think the investigation was thorough and unbiased,” Francis said. “I think it had to do with some kowtowing to the larger voice in society. It’s unfortunate this school system doesn’t stand behind its teachers even when the law has not been broken.” Francis apparently doesn’t think that the policies put in place to protect students and teachers alike are important or even apply to him. Francis said he and his lawyer, Allen Rogers, may discuss taking further legal action against the school system.

“Do I regret what I did? Absolutely not. Would I do it again? All I can say is I did it and I stand by it.”

The Cumberland County School Board must hold Francis accountable and demand that he publicly acknowledge his wrong doing, admit that he was wrong for stomping on the U.S. flag thereby insulting the military parents of those impressionable school children, admit that he was wrong for attempting to endanger those school children by fire and the inhalation of dangerous fumes, and admit that he had to be told by his own class the policies regarding the possession of dangerous objects by students like lighters and sharp objects. If Francis can’t meet this standard of humility and remorse then he is simply too toxic and dangerous to have around our children.

Negligent Retention. A type of employment-related claim in which a plaintiff asserts that an employer failed to discharge an employee who management knew, or should have known, had a propensity toward violence, sexual harassment, or dishonesty.

Superintendent Frank Till and the Cumberland County School Board should be concerned about the issue of civil liability associated with ‘Negligent Retention’ with regard to Francis.

Francis’ very own actions certainly serves to portray him as an employee with a propensity for acts of violence. The very act of setting anything on fire for the purpose of making a ‘statement’ is in itself a clear act of violence. It certainly can’t be cast as an act of love, or sympathy, or an act of building up. It is an act of violent destruction.

While not sexual harassment, Francis’ acts were bullying acts of harassment towards students and their families. The Cumberland County School System certainly doesn’t want to expose themselves to legal liability by retaining any employee who harasses a student for any reason.

And the dishonesty is well evidenced in his not teaching his students the truth in that he was instructing them by example that one may exercise such ‘Freedom of Speech’ in an employer/employee setting at the work place where one is most certainly under speech restrictions as a condition of employment. This dishonesty would lead all his students to disastrously unnecessary employment issues in their future.

Francis won’t be held to the necessary standards unless you the parents make your opinions known to the School Board. Don’t forget that there are two racists sitting on the board that the others need help in overcoming.

Simply click on this link and email them your comments and your expectations regarding the safety and educational standards that YOU expect for your child. They are, after all, your elected civil servants and are completely answerable to you. Is a ten day suspension without pay really a sufficient and appropriate enough action to be taken in this case? Is someone who threatens our children, the school system and the school board with threats of lawsuits and retribution really the kind of person we want or need teaching our children in Cumberland County?