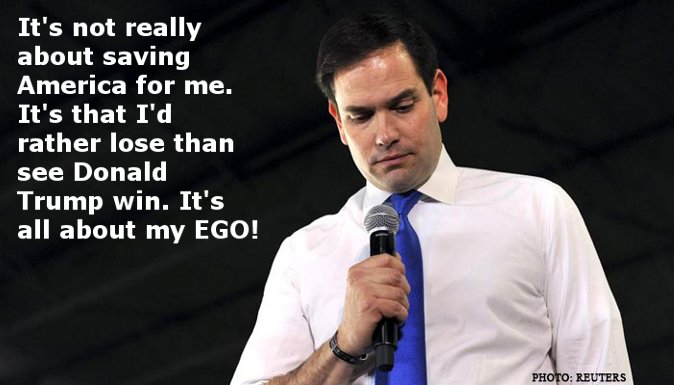 Rubio would rather lose than to see Trump win. Clearly the Establishment Republicans are running very scared to have told Cruz to take this measure rather than trying to win himself.

A top aide to Sen. Marco Rubio urged the candidate’s supporters in Ohio to support Gov. John Kasich in that state’s primary Tuesday, giving fresh momentum to efforts stop Donald Trump a day after a debate in which his rivals declined to take a swing at the leading Republican presidential candidate.

Alex Conant, Rubio’s spokesman, made the comments in an interview with CNN. He said that he hoped supporters of Kasich and of Sen. Ted Cruz would support Rubio in his home state primary in Florida on Tuesday, and that he would suggest Rubio’s backers in Ohio do the same by supporting Kasich there.

“I’m just stating the obvious,” Conant said. “If you are a Republican primary voter in Ohio and you want to defeat Donald Trump, your best chance in Ohio is John Kasich, because John Kasich is the sitting governor, he’s very close to Donald Trump in some of the polls there.”