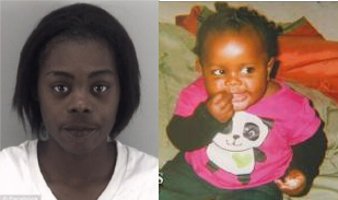 A Richmond, Virginia BLACK woman is facing charges of child neglect in the death of her 3-year-old goddaughter.

The Black woman, Danielle Turner, 24, was arrested after she reportedly beat 3-year-old Latrice Walden. On Feb. 15, Latrice was rushed to the hospital with injuries including a black eye, and her death was initially believed to be due to falling in the bathtub.

“Come to find out, we went to the detective and it wasn’t a fall,” Latrice’s grandfather, Kenny Simpson, told WRIC. “It was abuse … that’s exactly what it was, she was beaten.”

The Black woman Turner was reportedly watching her goddaughter at the time of her death, while the toddler’s mother was giving birth to a baby boy.