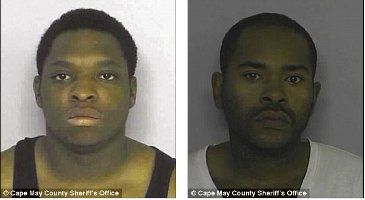 Two BLACK men from New Jersey have been charged with murder and sex crimes for the death of a 15-year-old girl, whose body was found in the crawl space of her home.

Both Black men were in jail on $1 million bail. A spokeswoman for the prosecutor said it wasn’t immediately known if either man had an attorney.

Cape May County Prosecutor Robert Taylor said Friday that the Black man 23-year-old Derrick Powers (left) and the Black man 33-year-old Charles Mosley (right), both of Rio Grande, were charged with the murder and sexual assault of Nicole Angstadt

The Black man Mosley was previously charged with having a sexual relationship with the Angstadt.

Angstadt was reported missing on December 1 and her body was found in a crawl space in an abandoned Lower Township home on December 14.