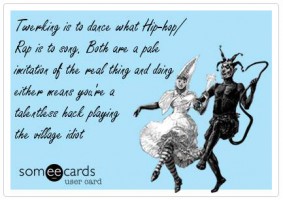 It started as a dispute between prominent bounce artist Big Freedia and a Mississippi town’s alcohol enforcement division over suspected gyrating.

The hip-hop artist from New Orleans, who was recently featured on Beyoncé’s new song Formation, was due to perform in Hattiesburg, Mississippi, as she had several times before.

But officials with the Mississippi Alcohol Beverage Control (ABC) have rules that limit the intersection of scantily clad entertainment and liquor, and this January, they decided to start enforcing them.

Twerking, waltzing and daggering – the dances that caused moral panic

“You can’t wear a thong. You must keep the cleft of your buttocks covered. And you cannot simulate a sex act,” said Mississippi ABC’s chief of enforcement, Rusty Hanna, explaining the Mississippi provision that called into question Freedia’s show.

According to Ben Shemper, owner of The Dollar Box Showroom where Freedia’s show was to take place, an alcohol agent threatened to shut the concert down if Big Freedia performed, and even threatened to shut down his club for a year. Some other bars in the town who were also threatened with fines during the same period in January question whether Shemper was forced to cancel the show. They say they were flagged for ABC review over burlesque shows and simply offered to alter their choreography.

But either way, the threats ended in the show’s cancellation, and outrage from Big Freedia that the alcohol officials had deemed twerking “adult entertainment”.