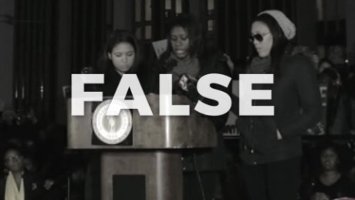 Things were just getting heated up at the State University of New York at Albany.

After three black female students reported that they were victims of a racially motivated attack by up to a dozen white men and women on an Albany city bus in January, outrage quickly followed.

One of the three tweeted that she was beaten because she’s black.

I can’t believe I just experienced what it’s like to be beaten because of the color of my skin.

Then her brother, San Diego Chargers lineman Tyreek Burwell, tweeted a threatening message to someone he heard was involved:

Even Democratic presidential candidate Hillary Clinton got into the act saying  “There’s no excuse for racism and violence on a college campus.”

At the rally, one of the three women offered a tearful speech.

But now WTEN-TV is reporting that the trio’s claims are being called false.

Turns out statements from other minority passengers on the bus contradicted what the three students claimed, sources told the Times-Union. And now charges against the three women are forthcoming, the paper reported, noting that the accusers were issued tickets to appear in court next Monday on undisclosed charges in connection to the Jan. 30 incident.

The smoking gun may be the bus’ surveillance video — which hasn’t been released to the public. One WTEN source watched it and told the station that one of the three accusers actually threw the first punch and that none of the passengers uttered racial slurs at them.

The source added that, on the contrary, one of the accusers used a racial slur against a white passenger:

Alice Green, a local social activist and director of the Center for Law and Justice, was among the few invited by the Albany County District Attorney to watch the bus surveillance video.

“I would not lock them up,” Green told WTEN in a misplaced effort to mitigate the actions of the three accusers, “but if it comes to be that they made false claims, there needs to be an apology perhaps.” Green added to the station that the video quality isn’t great and she learned more from witness statements.