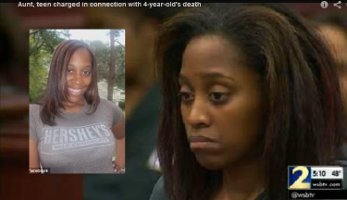 CLAYTON COUNTY, GA – A Black 15-year-old girl and her Black aunt have been charged after the teen allegedly punished her 4-year-old brother by hitting him multiple times with a leather belt, before holding him in a tub of hot water.

According to reports, the sister of 4-year-old Jamal Dunlap was punishing the boy for urinating on himself. The next day, police responded to the home after receiving a call of a boy having difficulty breathing.

Jamal was rushed to the hospital suffering from second- and third-degree burns over more than 40 percent of his body. He also had brain swelling and had an 80-degree core temperature. Jamal would die 30 minutes later.

Police would later arrest the 15-year-old girl and her aunt, 30-year-old Aleisha Harris, charging them both with murder and first-degree child cruelty charges. They were being held without bond Wednesday in the Clayton County Jail.

Harris’ brother said the only thing his sister is guilty of is trying to to “help a family in need.” He said that Harris was caring for the siblings because their parents dumped them on her and never returned.

He went on to add that the reason why they waited a day before taking the boy to the hospital, an act that very well could have saved the boy, was because she wasn’t sure if they had insurance. Seriously!?