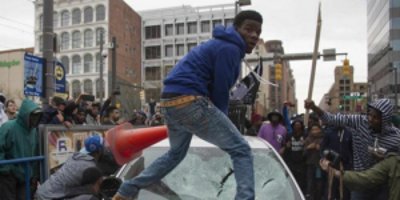 From the Baltimore Sun:

The plea deal for Allen Bullock, 19, was offered by Circuit Judge Charles Peters and calls for a 12-year prison sentence, with all but six months suspended. He will be placed on five years’ probation after serving that term, during which time he has agreed to complete 400 hours of community service and earn a high school equivalency certificate, or GED.

“I regret everything I did.” Allen Bullock after riot guilty plea.

More like he just regrets getting caught. But it will be fun watching him wash police cars, detailing them, and picking up garbage on our roadsides. After 400 hours of that then maybe he’ll learn something.