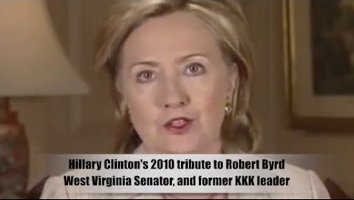 In fact, it was Democratic front-runner Hillary Clinton who hailed as a “mentor” the late Sen. Robert Byrd, D-W.Va., who joined the Klan in 1944.

Byrd was worried that during World War II, he might have to fight next to “race mongrels, a throwback to the blackest specimen from the wilds.” Byrd wrote those words in 1944 to Sen. Theodore Bilbo, a leading segregationist.

That Trump has been condemned for being supported by ex-Klan leader David Duke while Clinton has no such issue with her support of Byrd has promoted questions about equal treatment. Former Arkansas Gov. Mike Huckabee raised the issue Monday while on MSNBC’s Morning Joe.

Huckabee said, “But, look, let me ask you this, do you think Hillary Clinton is going to have to answer for her relationship with Sen. Robert Byrd who was an actual member of the KKK?”