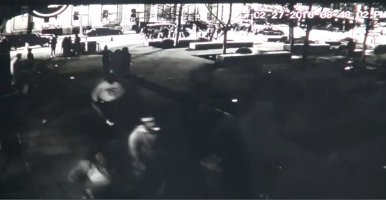 Downtown business owners are concerned after a mob of about 40 Black people caused havoc Saturday night. It was caught on video.

Imagine sitting in a downtown restaurant when you suddenly notice a large group of Black people heading for the door, all at once. Patrons at Sauce On The Side didn’t have to imagine it,they lived it Saturday night.

It was just past 8:45pm when a large group of Black people could be seen in the distance running down 8th street and then heading to the plaza outside the restaurant. Two of them flip over some chairs while other Black teens danced on a table.

A manager comes out to ask them if they are coming in to eat. They say, “yes” and follow him in.

The video shows a Black man in a white tee-shirt and dark hoodie move toward the counter, grab the tip jar, and run out the door. He passes through the crowd of his associates still hanging around outside.

The manager shouts to call the police, comes outside, and the Blacks all take off running. Police believe the Black group may have also broken into a couple of cars at 7th and Olive.

The manager of the restaurant is worried if this is a sign of things to come.

A witness who did not want to be identified said, “In what civilized culture is this even acceptable? These people are taught from the cradle to the early grave to be violent by their parents and surrounding adults. Obviously they dish out what they see daily right? This jumps from parents, to school, to neighborhoods. And here we see what the truth is. It’s the parents teaching their children how to be violent. Why aren’t the parents teaching these youth how to act properly? And you wonder why there is such a thing as ‘White Flight’?”