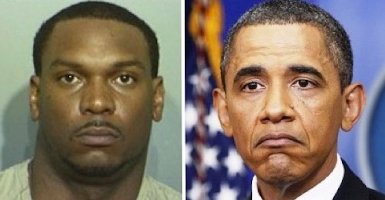 How can you not hang your heads in shame and embarrassment Black America at what our racial peers are doing? Many Blacks, because of their behavior, have EARNED the prejudice heaped upon them.
This is just more blood on Obama’s hands. In his desperate quest to roll back the sentences of “non-violent” drug felons Obama has created a more dangerous country and a much larger problem.

Sadly this policy has come back to haunt a mother and her two young children in the most horrific way.

Obama can’t exit the White House soon enough. The damage he has done to our nation over the last 8 years may never fully be reversed.

A convicted crack dealer who left prison early as part of the Obama administration’s mass release of federal inmates has been indicted by a grand jury for fatally stabbing his ex-girlfriend and her two kids in Columbus, Ohio. The gory crime drew national attention because the children, ages 7 and 10, were murdered to eliminate them as witnesses in the brutal massacre of their 32-year-old mother.

This week a grand jury in Franklin County returned a 10-count, death-penalty indictment against the ex-con, 35-year-old Wendell Callahan, for the triple murders. Callahan broke into his ex-girlfriend’s apartment and stabbed the three victims, according to a statement issued by Franklin County Prosecutor Ron O’Brien announcing the indictment.

Callahan should have been in jail when the crimes occurred, but he was released four years early because federal sentencing guidelines for crack dealers got reduced. The change is part of President Obama’s effort to reform the nation’s justice system as a way of ending racial discrimination.

The initiative was technically launched back in 2010 when the president signed a measure that for the first time in decades relaxed drug-crime sentences he claimed discriminated against poor and minority offenders.

This severely weakened a decades-old law enacted during the infamous crack cocaine epidemic that ravaged urban communities nationwide in the 1980s. As part of the movement the U.S. Sentencing Commission lowered maximum sentences for drug offenders and made it retroactive, leading to the early release of thousands of violent thugs like Callahan.

In November the administration began releasing 6,000 drug convicts coined “non-violent” offenders whose sentences were too long under the old guidelines. News reports quickly surfaced contradicting the administration’s assessment that the newly released convicts were not violent.

Among them was the leader of a multi-million dollar operation that smuggled drugs from Canada to Maine. Prosecutors refer to the 29-year-old con as a “drug kingpin” who was one of “America’s Most Wanted.”

Shortly before the administration’s mass release of drug convicts, federal prosecutors warned that drug trafficking is inherently violent and therefore the phrase “non-violent drug offenders” is a misnomer. The nation’s prosecutors also cautioned that reducing prison sentences for drug offenders will weaken their ability to bring dangerous drug traffickers to justice.

You are not going to be hearing about this one in the liberal media because this just doesn’t jive with the agenda.