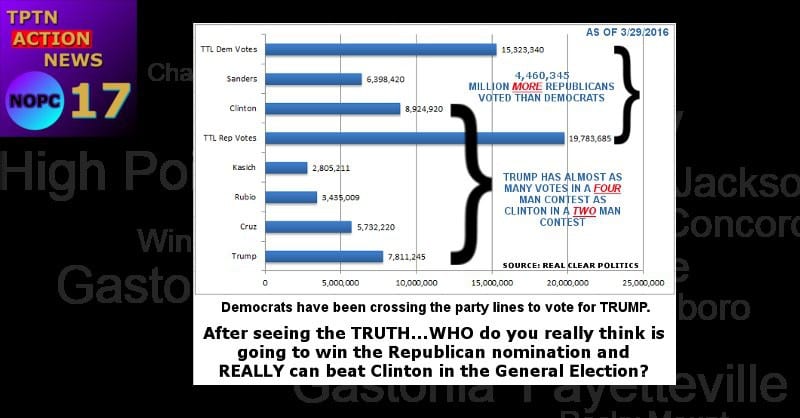 Clearly the MSM [main stream media] in collusion with the GOPe [GOP establishment] is conducting a full on campaign to manipulate you and the way you think.

What is happening here is that the MSM and GOPe is hoping you get too dejected to go out and vote for Trump. They are only interested in having the regular voters who are traditionally establishment favoring voters go out and vote. The new voters and those crossing party lines in favor of Donald Trump have the GOPe scared beyond the ability to act civilly, ethically and responsibility.

As you can see from the real voter turnout data there are some truths that the MSM and the GOPe don’t want you to realize.

Note the fact that Donald Trump, in a FOUR person race has almost as many votes as Clinton who is in only a two person race. Once you realize that come the General Election no true Republican will cross the party lines to vote for a murderous liar or a Marxist socialist nee’ communist you quickly see our second point.

Republicans have a 4.5 MILLION [4,460,345] voter advantage over the Democrats and additionally, many Democrats continue to abandon the Democrat party and crossover to Republican or Independent to vote for Donald Trump.  Do you really think that 4.5 million plus voters are going to suddenly change their minds and vote for a Democrat? Hardly.