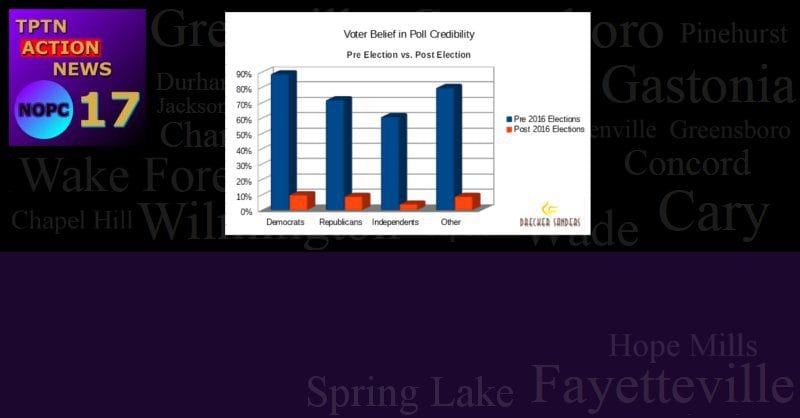 TPTN – In a stunning revelation a recent Drecker-Sanders poll (June 2017) reveals that no one believes in polls anymore and aren’t likely to believe in them ever again.

Drecker-Sanders is an exclusive private entity that does not advertise, maintain an internet presence, or accept any for-profit work so as to maintain its exemplary reputation as completely free from favoritism, self-interest, bias or deception. Usually examples of Drecker-Sanders’ work, while found in higher education doctorate disciplines, is not commonly found or cited elsewhere. It is only because of a deep dive research into scientific data from the National Academy of Sciences on polls and polling that this information was stumbled upon.

The Drecker-Sanders poll made a very concerted effort to achieve a completely unbiased poll by creating a program that randomly generates and calls telephone numbers (both cell phone and land line) per each state in the nation until 200 participants age 18 or older in each state completed the poll for a total of 10,000 persons polled. The program’s blind randomness resulted in data that coincided very closely with U.S. Census profiles of the states confirming no bias.

Before the 2016 elections 76% of voters overall gave polls credibility. Now however, an astonishing 96% of voters give polls of any kind no credibility at all and 98% overall have no intention of paying any attention to any polls regarding candidates or issues in upcoming elections.

Even more stunning is that 92% feel that any news report or article that uses a poll to substantiate it is now viewed as having less legitimacy overall. This feeling is held nearly equally by Democrats, Republicans, and Independents at 90%, 91% and 96% respectively.

Only 0.02% overall of voters intend to trust polls regarding topics such as “Climate Change”, LGBTQ Issues, 2nd Amendment Issues, and other issues in the upcoming elections. The damage was done when in the 2016 elections Donald Trump was projected by polls as losing.

The Democrats went into the election certain that they were going to win. The New York Times polls rated Hillary’s chances at 93%. The Huffington Post polls raised that to 98%. That was still too modest for Obama campaign manager David Plouffe who predicted a 100% likelihood of Hillary winning based on all the polls.

Yet in the election finals Donald Trump handily defeated Hillary Clinton by carrying 2,623 counties to her 489 counties, 30 states to her 20 states.

This was completely in opposition to what all the various supposedly accurate polls predicted.

The many abuses by media outlets by the use of “push” polls and the unethical use of poll questions to implant doubt or otherwise surreptitiously influence voters has come to a solid irrevocable halt.

Now the voters are done with polls. And not just done with polls but so irritated by polls that they now automatically view any reports by any media that contains poll information as lies not to be trusted.

Many are wondering what media giants like ABC, MSNBC, CBS, CNN or FOX will use now to substantiate their reporting now that voters no longer believe any polls. Clearly it would now be a complete waste of their money to hire pollsters that would only serve to discredit them in the long run regardless what their data results portray. The results obviously will not be believed by voters.

The lesson learned here is that the average voter is not as ignorant, nor can they be manipulated as easily as believed by media fake news.

The poll questions were;