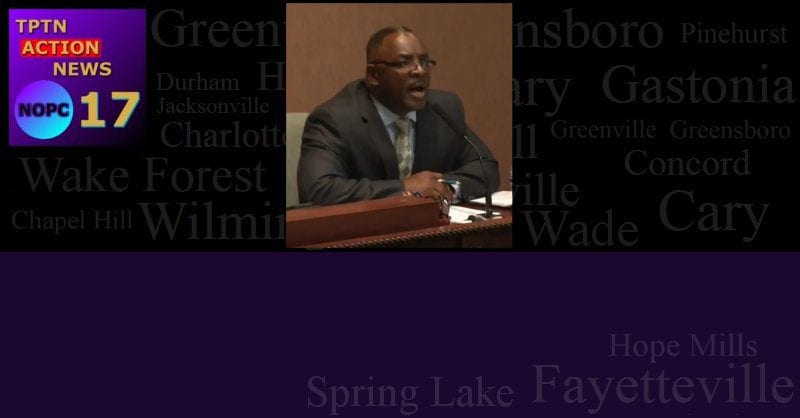 Council member Wright lashed out at Harmon in what can only be described as a violently antagonistic and embarrassing tirade towards Harmon over Harmon simply attempting to do his job and save Wright from violating well established law.

Apparently since the installation of convicted criminal Mitch Colvin as mayor of Fayetteville state laws and city policies don’t matter anymore what with city council member Tyrone Williams allegedly attempting to extort $15,000 from Prince Charles Holdings and now council member Wright viciously telling a city employ not to tell him to act within the confines of established law.

Hear for yourself the sheer vitriol Harmon was exposed to in a public and locally televised city council meeting. Talking over Harmon, interrupting Harmon, viciously berating Harmon, and all while Harmon had Wright’s and the city of Fayetteville’s best interests at heart.

Harmon: You should be looking at the uses of the property.

No person, and certainly not any city employee should have to stand there and take such abuse. Harmon’s professionalism however is a perfect example of the dedicated, highly trained and gracious staff hired by the city of Fayetteville.

Wright in contrast to Harmon appears to be nothing more than a barbaric, lowbrow, uneducated, unrefined and undignified angry black man.

A member of the city staff agreed to speak to TPTN on the condition of anonymity fearing the loss of their job if exposed.

“Oh this is just the tip of the iceberg. Council member Wright is well known for being arrogant and cocky towards city staff. He acts like he’s all high and mighty. A lot of the staff feel that Wright talks down to them like they’re dirt. He has that ‘Big me, little you’ attitude. Many of us have noticed that it seems to happen more towards white staff members than people of color. We try to ignore it but it’s hurtful and it just isn’t right. I hope HR sees how he acted towards Mr. Harmon and finally does something about it. Mr. Harmon didn’t deserve to be treated that way.”

And many citizens are questioning why Colvin didn’t perform his duties as mayor and enforce city policy which clearly states;

Part II; Chapter 2 (Administration) Article IV: Code of Ethics;  Section 2-91 Policy (a,b) The public judges its government by the way public officials and employees conduct themselves in the posts to which they are elected or appointed. The people have a right to expect that every public official and employee will conduct himself in a manner that will tend to preserve public confidence in and respect for the government he represents.

Part II; Chapter 19 (Human Resources); Article I: In General;  Section 19-1 Merit Principals (a) Fair treatment. Applicants and employees shall be assured of fair treatment in all aspects of human resource administration without regard for race, color, religion, sex (including pregnancy, gender identity, and sexual orientation),  national origin, age (over 40), disability, genetic information, or political affiliation.  Individuals shall likewise be treated with proper regard for their privacy and constitutional rights as citizens.

City Council Policy 115.2 “…neither the Council nor any member thereof shall give orders to any subordinates of the City Manager, either publicly or privately.

Harmon deserves an apology that is just as public as the embarrassing public berating he received from Williams.

It is not at all too much to ask that Wright publicly apologise to Harmon during the next city council meeting and not one of those non-apologies like “I’m sorry ‘you’ took my words the wrong way.” That’s not an apology.

Saying “I’m sorry you feel that way” to someone who has been offended by a statement is a non-apology apology. It does not admit there was anything wrong with the remarks made, and may imply the person took offense for hypersensitive or irrational reasons. Another form of non-apology does not apologize directly to the injured or insulted party, but generically “to anyone who might have been offended”.

Let’s see if council member Wright has the intestinal fortitude and strength of character to sit in that council member chair and say the words to Harmon as he stands at the podium; “Mr. Harmon, I’m truly sorry for wrongfully publically lashing out at you in such a barbaric and unprofessional manner as I did during the April 23rd, 2018 City Council Meeting. Please accept my apology sir.”