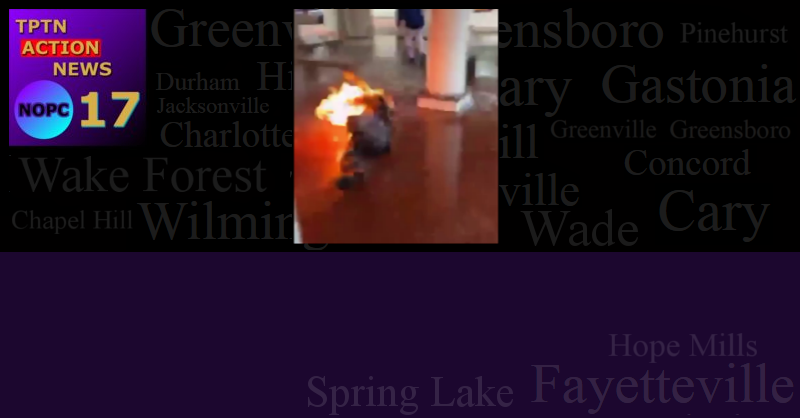 Fayetteville N.C. – Despite numerous attempts to burn down the Fayetteville Market House it remains standing today as a symbol of utter defeat for the George Floyd Black Lives Matter activists and rioters.

The appellation of “peaceful protester” was very short lived as the crowd soon resorted to damage, destruction and arson. In the end the only “change” these thuggish bad actors actually intended was changing the possession of property from the hands of the rightful owners to their own larcenous hands. It was never about George Floyd’s death.


Duke University Professor John Cavanagh says his research shows that slaves occasionally, “maybe” four times in the history of the building, were sold at the Market House. And of those four, two were reported to have been white Irish slaves. Slaves were actually sold on the old court house steps and other areas in Cumberland County for about 33 years during the 19th century. The historic Market House primarily was a “typical town market” where meat, vegetables and produce were sold, he said. Cavanagh was hired by the city to research the history of the Market House and its predecessor, the State House. Cavanagh did his research in conjunction with the bicentennial observance of North Carolina’s ratification of the U.S. Constitution at the State House in 1789.

It wasn’t just the rioters who made a consummately bad showing in the eyes of Fayetteville’s citizens either. Chief Gina Hawkins and her command staff failed miserably displaying meager and ineffective attempts to protect the city.

There was no sign of Sheriff Ennis W. Wright and any of his deputies either even though their offices were just down the street from the Market House and the Cross Creek Mall is definitely within their county jurisdiction.

Even though the Fayetteville Police Department had received numerous warnings throughout Saturday morning that there would be attempts to burn down the Market House, damage to property and looting Saturday evening the Fayetteville Police were strangely unprepared to deal with the threat. The Market House and surrounding properties were left unguarded. Initially not even one law enforcement officer, city or county, appeared to be present in the area.

The most common phrase by far shouted throughout the evening didn’t have anything to do with George Floyd or Black Lives Matter. It was;

Several business owners within the Market Square area along Hay St., Green St., Gillespie St., and Person St. are completely disgusted with the response of Chief Gina Hawkins and Sheriff Ennis W. Wright and their apparent inability to provide property security and security for the Fayetteville Fire Department. This was even though they had advance warning of the threats that they would face Saturday evening. Responses to fires and property damage that should have taken only minutes took hours to achieve by Chief Gina Hawkins and her command staff.

Many officers on the department have expressed their disgust and anger at the way they were restricted from performing in accordance with their oaths of office which reads;

These officers have also contacted TPTN and asked us to tell the citizens of this community that if the citizens give them the proper leadership either through voting in a new mayor who’s not a criminal, or by taking the city council to task and demanding a new police chief, they stand ready to provide the type of effective and fair policing the citizens expect and deserve. They made it clear that this almost certainly means a change of Mayor and Chief of Police in light of their recent ineffectiveness.

One interestingly bright spot of the evening was the karma-esque instant retribution to an arsonist who tried to set the Market House on fire. In what can only be described as a comedy of errors a rioting arsonist was deservedly severely burned as if the hand of George Floyd himself reached up to slap the fire onto the head of the criminal arsonist in an admonishment to not disrespect his death in such a manner.

Several in the Fayetteville community have questions that they want answers for, such as;

Make no mistake, the blame lies squarely on the shoulders of Chief Gina Hawkins, Sheriff Ennis Wright and Mayor Mitch Colvin. Not on the good law enforcement officers and fire fighters who work for them. It’s time for them to account for their actions.