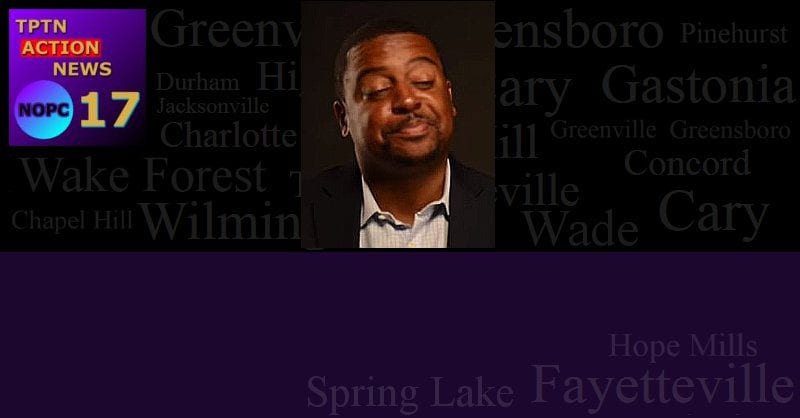 Fayetteville, N.C. – Fayetteville’s criminally convicted Mayor Mitch Colvin is leading the charge to deface traffic control devices, specifically crosswalks, for the racist purpose of surreptitiously elevating his race, the black race above the other races. Whoever dreamed up this exceedingly dangerous idea, whether Colvin or some other simpleton, should be harshly chastised for trying to put drivers at risk or put pedestrians in danger like this.

At issue is the idea to place sayings into downtown crosswalks in either yellow paint or other materials that proclaim: “Equality now,” “End racism,” “One nation, one people” and “Choose love.”

This is merely more knee-jerk reactions to the often debunked and rejected media inflamed protest movements regarding alleged “police brutality” and “racism” that no longer exists in this post-racial society except for that promulgated by such entities such as the Black Lives Matter organization. An organization that has been outed as nothing more than a fundraising front for the Democrat party. Or the Antifa, another organization that’s been recently listed as a terrorist group much along the lines of the Hamas, Red Army Faction (the Baader–Meinhof Gang), Ku Klux Klan, or the Black Panther Party.

And even now some Fayetteville council persons and constituents are whining and gnashing their teeth at the outcome that the clearly racist phrase “Black Lives Matter” was rejected as a possible slogan. But then, what honest and truly progressive human being would think that separating out and elevating one “race” above other races, of all things, a proper thing to do in this post-racial society.

However, defacing traffic control devices such as crosswalks is illegal. Even more chilling is the liability that it exposes the City of Fayetteville. The extreme potential for vehicle/pedestrian injury or fatality cases as a result of the proposed crosswalk defacements. When crosswalks are defaced in such a manner they are no longer lawfully enforceable crosswalks, but rather they become simply more environment littering “signage” that no longer serves to warn vehicular traffic and protect pedestrians. And it is seriously doubtful that such advertisement signage in a roadway is legal either. It stands to reason that if one is not allowed to post signage on traffic signs and telephone poles then defacing the roadway in such a manner would not be allowed.

In fact, the City of Fayetteville should consider this article to be a public notice of their liability regarding defacing crosswalks with anything at all and that there’s to be nothing except an aesthetic treatment between the white transverse lines of a crosswalk and that the City of Fayetteville and they, the city council, the city manager and any other person(s) found to be involved in such illegal activities will be held legally liable and responsible in both their personal and professional capacities should any person be injured or killed either directly or indirectly as a result of such crosswalk defacements.

(b) Municipal Street System. – All traffic signs and other traffic control devices placed on a municipal street system street must conform to the appearance criteria of the Uniform Manual. All traffic control devices placed on a highway that is within the corporate limits of a municipality but is part of the State highway system must be approved by the Department of Transportation.

One would think that the City of Fayetteville’s city attorney, Karen McDonald would have sufficient training, knowledge and the competence to have quickly warned the criminally convicted mayor Colvin and the city council that what they are planning is illegal and quite frankly insufferably moronic in the extreme.

Q: Can I put any design or collection of art treatments in a crosswalk as long as the transverse white lines are present?

A: No. The FHWA has consistently stated since 1984 through eight Official Interpretations that nothing except an aesthetic treatment is allowed between the white transverse lines of a crosswalk. If non-retroreflective colored pavement, including bricks and other types of patterned surfaces, is used as a purely aesthetic treatment and is not intended to communicate a regulatory, warning, or guidance message to road users, the colored pavement is not considered to be a traffic control device, even if it is located between the lines of a crosswalk. Additional guidance and a summary of past Official Interpretations on this topic is summarized here.

Q: My city is trying to make the downtown area more aesthetically pleasing and pedestrian-friendly. We are installing brick sidewalks, benches, trees, and other “streetscaping” features along the business district streets. As part of the project, we plan to install brick pavers or other similar treatments to serve as the crosswalks at intersections. Can this type of crosswalk meet the MUTCD requirements?

A: The brick pavers alone would not constitute a legal crosswalk. White, retroreflective pavement marking lines must be used to officially establish a legal crosswalk. As discussed in Chapter 3G of the 2009 MUTCD (Colored Pavements), brick pavers and colored decorative paving treatments that simulate brick or other patterns may be used between the white crosswalk lines. However, colors that degrade the contrast of the white crosswalk lines with the adjoining areas and colors that might be mistaken by road users as a traffic control application or might otherwise constitute a distraction should not be used for this purpose. So, for example, the standard colors of red and yellow used for STOP signs and warning signs should not be used, nor should the colors white and yellow as these are used for pavement marking lines. Also, retroreflective colored pavements of any color or pattern are prohibited between crosswalk lines.

Q: I’ve heard about a crosswalk design that simulates 3-dimensional (3-D) objects in the roadway. Is such a concept compliant with the MUTCD?

A: This concept does not comply with the MUTCD. As a result of demonstrated safety concerns, the FHWA is no longer considering field experimentation with “3-D” crosswalk designs. The FHWA had previously approved field experimentation with “3-D” markings until one such experiment showed unintended—and potentially dangerous—effects. A significant percentage of drivers swerved upon seeing the markings, perhaps perceiving them to be real raised objects on the roadway. While this type of driver reaction did decrease over time, the experiment showed that at least more than one in ten drivers might make an evasive or erratic maneuver upon experiencing this or similar installations for the first time. The results suggest that a “3-D” marking design can result in unsafe behavior by drivers. If the design is effective at portraying a 3-dimensional object and drivers believe there are real raised objects on the roadway, it is a reasonable expectation that drivers will take evasive action, such as braking abruptly, in fear of colliding with the perceived obstruction. This type of driver reaction is, in fact, what the experiment showed. The potential for a significant percentage of drivers to react unpredictably is too great a risk to allow further field experimentation.

In addition to being very illegal it is also an unwarranted race-based waste of the hard earned tax dollars paid in by Fayetteville’s diverse community which is in fact a plurality. Fayetteville is comprised of more than just blacks, It has representatives of a majority of races and ethnicities especially being located next to Ft Bragg. Each and every one deserving equal recognition in our community.

Let’s hope that someone in our system of government comes to their senses and puts a firm and legally necessary end to this nonsense before someone gets hurt and the tax payers of Fayetteville end up being the ones with real and legitimate oppression to their city infrastructure and city goals due to a lawsuit that could have been prevented.