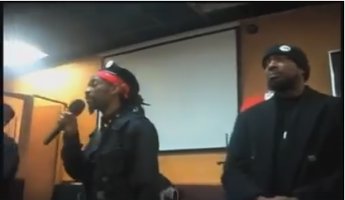 Philadelphia, PA – In an astonishing video released by supporters of BLM a Black man is seen advocating and calling for the killing of not just Whites, but even white newborn babies.

Community leaders have condemned this video as being racist and reflecting a most vicious racism of the highest order.

“It is astonishing to me how these people are not arrested!” exclaimed Pastor DeAndre Locklear of the Holiness Free Baptist Church. Locklear went on to say that, “It’s people like this who bring oppression and hatred on us Blacks. We need to publicly reject and stop people like this from saying and doing these kind of things. It’s unholy. They’re acts of Satan and not of God.”

Law enforcement declined to respond on the record but a state law enforcement officer off the record commented that nothing could be done about it as long as people like Obama and Loretta Lynch have positions of authority. It’s really disheartening to see Black role models like Beyoncé support this kind of racist viciousness.