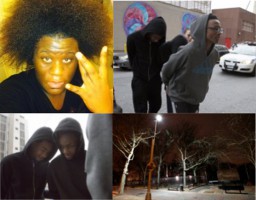 How can you not hang your heads in shame and embarrassment Black America at what our racial peers are doing? Many Blacks, because of their behavior, have EARNED the prejudice heaped upon them.
An 18-year-old Black girl who claimed she was gang raped by five teenage boys while she was with her father in a park has admitted to having consensual sex with her father in early January.

The unnamed girl originally claimed that she was with her 39-year-old father in the park drinking at about 9pm on January 7 when the group of Black teens approached them.

She said the boys ordered the father to leave and then they raped her.

Subsequently, Denzel Murray, 14, Shaquell Cooper and Ethan Phillip, both 15, and Onandi Brown and Travis Beckford, both 17, were charged.

But the charges have now been dropped after she admitted to having consensual sex with them and her father on Wednesday.

Brooklyn District Attorney Ken Thompson said: ‘The complainant, as well as her father, provided multiple inconsistent accounts to NYPD Detectives and to experienced Special Victims prosecutors about important material facts in this case.

‘The complainant has recanted her allegations of forcible sexual assault and the existence of a gun, and she does not wish to pursue criminal charges against any of the defendants.’

Originally, the girl had told investigators that when her father returned to the scene and hurled a bottle at the them, one of them pulled out a handgun and ordered him to leave.

Police Chief of Detectives Robert Boyce said at the time, the young woman gave a very credible report, adding: ‘She had physical injuries at the time. She was traumatized.’

Her father tried to flag down two police officers and told them he feared his daughter was being murdered and was ‘hysterical’.

The young woman claimed she had bipolar disorder and post-traumatic stress disorder, but was not taking any medicine.

After the Black suspects’ were charged, two of them told investigators they believed the sexual encounter was consensual, police said.

They claimed the young Black woman was having sex with the man,who turned out to be her father, in the park before he staggered away from the scene, leaving his daughter alone with the Black teens.

One of the boys allegedly asked the father: ‘Can we have some of that?’