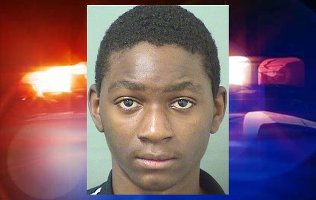 How can you not hang your heads in shame and embarrassment Black America at what our racial peers are doing? Many Blacks, because of their behavior, have EARNED the prejudice heaped upon them.
From News 96.5:

When 17-year-old Denzel Jackson couldn’t take a 26-year-old mother’s purse straight from her hands, West Palm Beach police said he kicked her. When she didn’t let go of her purse then, he bit her fingers, trying to loosen her grasp. When that didn’t work, he turned to her 2-year-old child and punched the toddler in the face, according to the police report.

Jackson, who faces adult charges of robbery without a weapon and child cruelty, made his first appearance in court Thursday morning. Judge Joseph Marx ordered the teen be held on $100,000 bail at the Palm Beach County Jail.

The victim had been sitting at a bus stop on Jan. 18 when she was a approached by a young man later identified as Jackson. She asked him if she could help him with something and he replied by grabbing her purse, according to the report.

The two went back and forth, Jackson kicking, hitting and biting the woman, until he stopped for a moment and “looked directly at her 2-year-old,” according to police.

The woman told police Jackson punched the child in the side of the face and she let go of her purse to protect her child.

The teen was located later that morning by a stolen car, but ran off, police said. A purse was left behind with the woman’s belongings, according to the police report.

Jackson does not appear to have a criminal record as an adult, but his juvenile record is unknown.