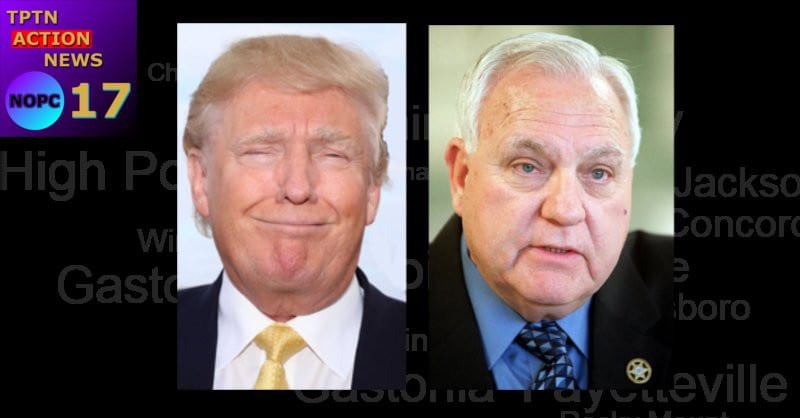 Cumberland County, NC – Residents in Cumberland County are wondering if their Sheriff has finally reached the point where he is no longer fit to serve out the remainder of his term of office as a result of his allowing nonsensical comments like charging a political candidate for making a campaign speech for the office of the president of the United States

Last week, Trump visited Concord and Fayetteville in rallies that attracted thousands of attendees. During the rally in Fayetteville, a protester was assaulted as he was escorted from Crown Coliseum by police. A Linden man who should have been immediately arrested was later charged in the incident, and Cumberland County Sheriff’s Office investigators working for Sheriff “Moose” Butler said Monday that they are considering filing a charge of inciting a riot against Trump.

During Butler’s last election questions arose wondering if Butler had developed dementia as had his sister reportedly.

One witness reported, “I was with some friends at the Rainbow restaurant and a guy by the name of Larry Sessoms walked up. As we were discussing politics Larry asked ‘What’s wrong with Moose? I have know him all my life and I saw him a couple of days ago at a restaurant. He did not know who I was. He has a problem. Why is he running?'”

A Deputy Sheriff who naturally wishes to remain anonymous to keep his job said. “He has had 4 wrecks in the last 6-8 months. He had the wreck where he said dog ran in front of him, he hit another ladies car, he hit another sheriff’s car in the mountains….side swiped it, and ran into a detective’s car on the LEC ramp.”

Mike Huckabee remarked that this was nothing more than left wing thuggery calling into question a Democrat Sheriff like Butler using the Office of the Sheriff in an unethical attempt to affect elections.

Many residents are starting to call for a review of Butler’s competency after this latest foolishness regarding charging Donald Trump who is clearly the victim and not the criminal in these matters.

The residents are also asking why Deputy Sheriffs did not immediately make arrests considering that N.C. law has provisions for the misdemeanor arrest of violators who commit crimes in a law enforcement officer’s presence. They worry that this is a sign of an ill trained sheriff’s department.