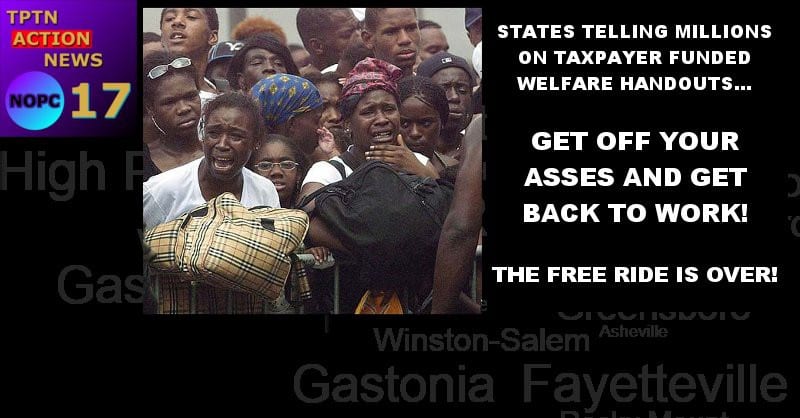 A new Mississippi policy requiring that lazy work capable food stamp recipients find work or volunteer to maintain their benefits went into effect on Wednesday and brought with it some rather surprising results.

Mississippi Gulf Coast news station WLOX reported that the policy requiring that recipients of the Supplemental Nutrition Assistance Program work or volunteer 20 hours per week inspired a number of residents in the city of Gulfport to get off their butts and actually put in some effort.

“I’m working here as part of the SNAP program,” said Percy Fayard, who started volunteering at Feed My Sheep this Monday. It was either that or starve. In a rather ironic twist, the company he chose to volunteer happens to be a faith-based organization that provides food to the homeless.

“I’m in a current state of job search and I’m trying to make sure that I can still at least afford to live,” he added, noting that putting in long hours to maintain his benefits did not bother him ‘too much’. Another volunteer, Sharon House, expressed a similar sentiment. It was nice laying around smoking dope and doing nothing but I guess that’s over now.

“Really, it’s more of a job opportunity to help you get out into the job world, and being up here helps you out a lot,” she said. “As tough as it may be, if I’ve got to do it, I can’t let anything stop me or get in my way. I have goals, I have dreams, it’s life.” And I don’t like starving much either.

These SNAP recipients deserve having to at least do something to earn the money to survive that’s provided by others who work hard according to Mississippi’s new policy, though judging by the attitude typically maintained by welfare users, we realistically expect most of the state’s SNAP recipients to respond in an entirely different way and just whine and cry about it.

Plus, when Maine Gov. Paul LePage, a Republican, enacted a similar rule in his state, 78 percent of welfare recipients in his state eventually dropped out of the program instead of simply rolling up their sleeves and putting in some hard work. The abuses of the taxpayer funded welfare handout program were drastically reduced there.

“I want people to be able to get what they need to live: enough food, a place to live, and an education for their children. Government does not provide these as well as private charities and businesses”. We have rights, as individuals, to give as much of our own money as we please to charity; but as members of Congress we have no right so to appropriate a dollar of public money.” ~Colonel David Crockett, member of Congress 1827-32, 1832-35

“I cannot undertake to lay my finger on that article of the Constitution which granted a right to Congress of expending, on objects of benevolence, the money of their constituents.” ~James Madison
[su_spacer]

“What shall we do with the Negro? I have had but one answer from the beginning. Do nothing with us! Your doing with us has already played the mischief with us. Do nothing with us! If the apples will not remain on the tree of their own strength, if they are wormeaten at the core, if they are early ripe and disposed to fall, let them fall! I am not for tying or fastening them on the tree in any way, except by nature’s plan, and if they will not stay there, let them fall. And if the Negro cannot stand on his own legs, let him fall also. All I ask is, give him a chance to stand on his own legs! Let him alone!” ~~ Frederick Douglas