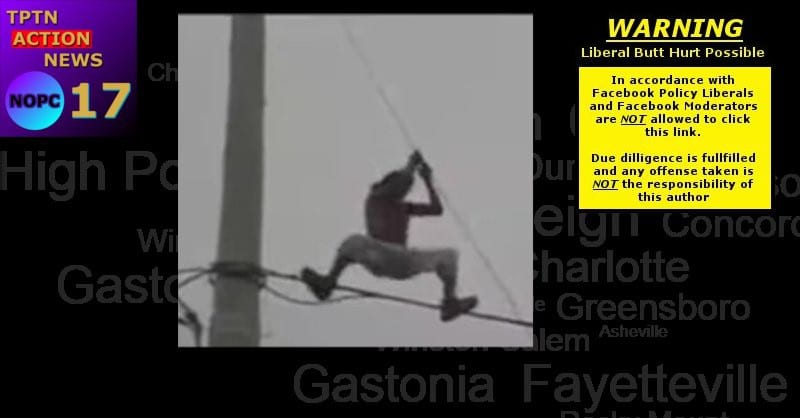 For several years there has been numerous arguments as to why Blacks display a decided lack of inhibitions and commit acts of crime, stupidity and irresponsibility on a highly disproportionate level in comparison to the other races.

There can be no doubt after seeing actions like this Black man attempting to dance and twerk on high power electrical lines like these 75,000 and 115,000 volt electrical lines that there is something seriously wrong with the judgement capacity of many Blacks.

Many studies are pointing to a ‘cultural’ aspect in Black communities that has suppressive effect on the acceptance of education and thus the collective Intelligence Quotient of the Black community.

Obviously a suppressed education and IQ leads to bad judgements and poor choices in the life of the average Black person.

First and foremost the need for cultural changes must begin at home. It is the responsibility of the parents to shed bad cultural practices like racism against the other races whether they are White, Asians, Indians or Pacific Islanders. In this post-racial society there is no longer a need for such an unsound and invalid cultural paradigm among Blacks.

It is time that the current cultural position that Black men are not responsible for the rearing of their children in both the obligatory and monetary senses be forcibly rejected by Black community in the form of legal and societal consequences.

In summary it is the fault of the parents when their offspring makes bad decisions and acts criminally…or in this case with such stupidity.