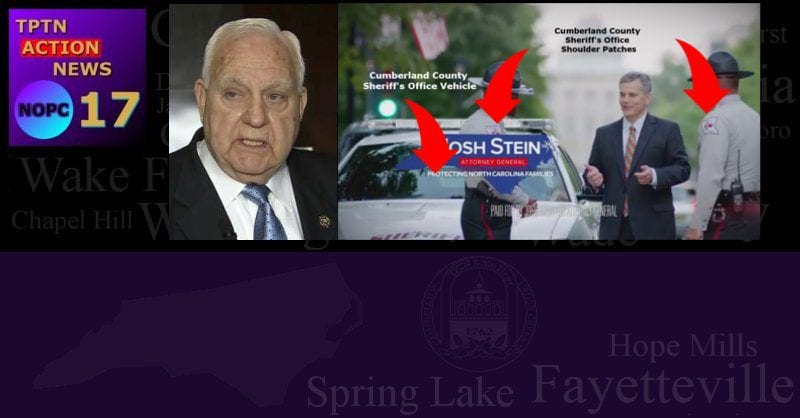 Cumberland County taxpayers who expect their tax dollars to be spent in the sheriff’s office only on those things that relate to crime and the persecution of crime demand an explanation regarding just who authorized this expensive corruption that wasted taxpayer dollars on gas for the trip to Raleigh, N.C. and wasted taxpayer dollars on deputy pay for them to appear in a Democrat advertisement for Democrat candidate Josh Stein who’s running for the position of Attorney General for North Carolina.

Also questioned is the clear and unethical violation of the County of Cumberland’s and the Cumberland County Sheriff’s Office policies regarding any of its deputies engaging in political activity in uniform for the purpose of  showing favoritism of one candidate over another. Such activity by these Cumberland County deputies is expressly forbidden by state law and local policies, rules and regulations.

There is no question that these were Cumberland County Sheriff’s Office deputies as their vehicle and shoulder patches were highly visible in the advertisement.

Since County Deputies have been warned year after year that conducting any political activities in uniform will result in termination it is very hard to believe that these two deputies would have willingly violated state law and departmental policy and risk their employment and the ability to feed and house their families just to support a political candidate. The only reasonable logical determination is that they had to have been ordered to appear in this Democrat political advertisement.

One would expect a person running for the position of state Attorney General to at least be well versed in our state’s laws to know that what these deputies were doing was ILLEGAL under our state’s laws.

‘We the People’, the taxpayers of Cumberland County demand to know who gave the order for those deputies to violate state law and demand to know just what the Cumberland County Sheriff’s Office and their supervisors, the County of Cumberland Commissioners, W. Marshall Faircloth, Glen B. Adams, Jeannette M. Council, Kenneth S. Edge, Charles Evans, Jimmy Keefe, and Larry L. Lancaster is going to do about this corrupt law breaking cabal that apparently exists within the Sheriff’s Office. Which of these commissioners is going to perform the ethical and necessary job that they were elected to do and call for the State Bureau of Investigation (NCSBI) to investigate this incident and levy the charges and hold those responsible for their criminal activity. Or will they simply hide and let this corruption continue?

And a candidate for attorney general who knew, or reasonably should have known that what he was doing was illegal needs to also provide answers for his actions.

It is not the purpose of this section to allow infringement upon the rights of employees to engage in free speech and free association. Every county employee has a civic responsibility to support good government by every available means and in every appropriate manner. Employees shall not be restricted from affiliating with civic organizations of a partisan or political nature, nor shall employees, while off duty, be restricted from attending political meetings, or advocating and supporting the principles or policies of civic or political organizations, or supporting partisan or nonpartisan candidates of their choice in accordance with the Constitution and laws of the State and the Constitution and laws of the United States of America.

(b) Definitions. For the purposes of this section:

(1) “County employee” or “employee” means any person employed by a county or any department or program thereof that is supported, in whole or in part, by county funds;

(2) “On duty” means that time period when an employee is engaged in the duties of his or her employment; and

(3) “Workplace” means any place where an employee engages in his or her job duties.

(c) No employee while on duty or in the workplace may:

(1) Use his or her official authority or influence for the purpose of interfering with or affecting the result of an election or nomination for political office; or

(2) Coerce, solicit, or compel contributions for political or partisan purposes by another employee.

(d) No employee may be required as a duty or condition of employment, promotion, or tenure of office to contribute funds for political or partisan purposes.

(e) No employee may use county funds, supplies, or equipment for partisan purposes, or for political purposes except where such political uses are otherwise permitted by law.