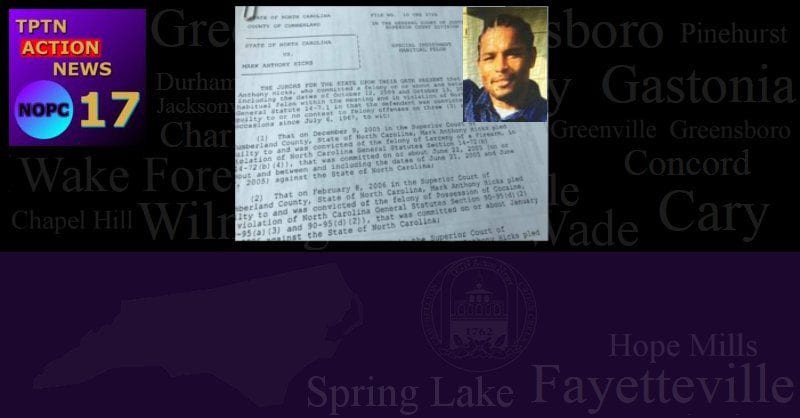 Fayetteville, N.C. – Relatives of the Fayetteville Police Department officers who were forced into shooting a knife wielding criminal who had just killed a woman say the officers are ‘good people’ who were just trying to make the city a little safer for everybody.

“I can’t understand what happened.” said one relative. “They try to get him to comply and live but he just wouldn’t listen.” said the officer’s relative.

Another relative said, “These officers are good boys and girls. They are not violent people. They are just being unfairly put into situations where they have to rely on their training to render the area safe as quick as possible for all concerned. That doesn’t make them violent.”

riminal, later identified as Mark Anthony Hicks, was a 31 year old Black man who stayed in trouble, recently spent five years in prison and was a habitual felon according to court records.

The incident happened about 10 p.m. in a home in the 800 block of Bedrock Drive at Vigilante Court, Fayetteville, N.C.

Officers arrived to find a Black man standing over a woman, who was in a pool of blood. The criminal Hicks lunged at the law enforcement officers with a knife and was shot by officers.

A brother of one of the officers said, “It’s despicable how the parents of this thug didn’t raise their son to be respectful of others or have any respect for human life. And the grandparents of this thug are no better either. Now these officers have to live the rest of their lives remembering that they were forced to take this useless thug’s life and who knows how this will affect them. It’s just a damn shame that officers have to go through this because some people didn’t raise their kids right expecting a village to do it for them.”

Interim Chief Anthony Kelly confirmed a body camera recorded the shooting, calling it “graphic.” The existence of the recording is expected to silence any attempts to vilify the police and provide an inarguable record that the police officers followed established law and department policies unlike the criminal Hicks. It has not been released.

During the murderous rampage by Hicks two young children jumped from a window, about five to six feet above ground, and ran to the home of Nicole McKoy, who lives across the street. Her children often played with the boys, she said.

When they came to her door, McKoy said, the younger child was crying because he saw his mommy killed. The older child was on a cellphone with a 911 dispatcher saying, “He [Hicks] stabbed my mama in the neck and there’s blood all over the floor.”