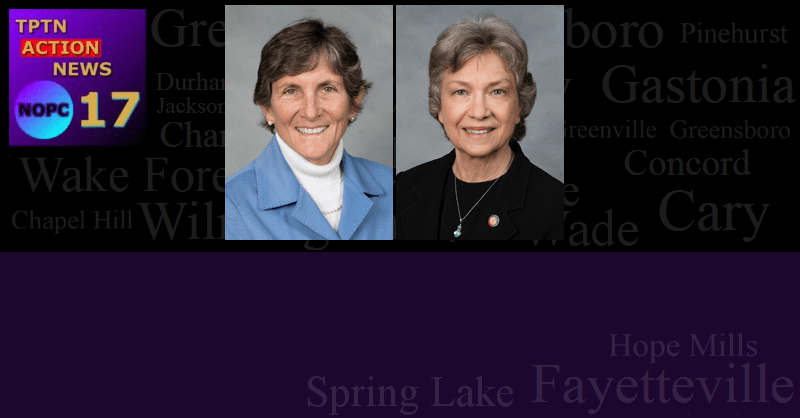 North Carolina – North Carolina Democrat Representatives Pricey Harrison (Guilford Co.) and Verla Insko (Orange Co.) have apparently failed to notice that their party is in shambles, that Donald Trump (a 2nd Amendment supporting Republican) won the Presidency, and that under the 10th Amendment gun control is not a state’s right but rather a federally protected right already addressed under the 2nd Amendment of the U.S. Constitution.

The 10th says: “The powers not delegated to the United States by the Constitution, nor prohibited by it to the states, are reserved to the states respectively, or to the people.”

The 2nd Amendment of the U.S. Constitution establishes our nation’s only control on weapons by insuring that weapons can not be restricted by government, state or federal, and the 10th Amendment insures that no individual state can usurp that authority from the people by removing from the states any authority over the “right to bear arms.” It is the responsibility of the Executive Branch of government [the President] to enforce the U.S. Constitution and act to stop any state interference in the 2nd Amendment rights of ‘We the People’.

Clearly this introduction of time wasting legislation that is doomed to fail is just more sad lunatic liberal posturing by Democrats to at least ‘appear’ relevant in the eyes of their constituents. It is quite amusing to watch these Democrats make complete fools of themselves with the introduction of legislation that has been overturned and rejected numerous times already. It is a patent truth that doing the same thing over and over again expecting a different result is certainly symptomatic of a serious mental health issue.

Much like a person who has just died will express ‘agonal breathing’ giving the false appearance of continued life, so too does the Democrat party in North Carolina express a figurative agonal breathing as evidenced by Democrat Representatives Harrison and Insko’s filing of House Bill 723 [Stand Your Ground Law Repeal], giving the false appearance of political life and relevancy.

What’s really at issue here is the fact that North Carolina’s stand your ground laws have had a dramatic impact by providing for the natural and logical imposition of consequences against those who would be ignorant enough to think that they are entitled to attack the person’s and property of others. Certainly Harrison and Insko should be mocked and ridiculed for their actions in this issue as it’s clear that they have no sense of social expectations and the agenda mandated by the winning voters and President Donald Trump.

The core component of the ‘Stand Your Ground’ and ‘Castle Doctrine’ laws in general is the establishment that right at the start that the lawful occupant of a home, motor vehicle, or workplace is presumed to have held a reasonable fear of imminent death or serious bodily harm to himself or herself or another when using defensive force that is intended or likely to cause death or serious bodily harm to another who is unlawfully and forcefully entering, or had unlawfully and forcibly entered, a home, motor vehicle, or workplace of the victim.

Also contained within the law is the fact that a lawful occupant within his or her home, motor vehicle, or workplace does not have a duty to retreat from any intruder.

What all this results in is the fact that liberals like the anti-illegal alien enforcement sheriff ‘Sancutary Sally’ Hernandez or the Baltimore District Attorney Marilyn ‘Let Them Have Space to Riot’ Mosby can’t even create an oppressive atmosphere by automatically arresting you for shooting a thug because it’s incumbent on them to prove that the thug wouldn’t have caused you imminent death or serious bodily harm before arresting you. You, the real victim, don’t have to say a word in your own defense. The law says it for you.

These feckless Democrats, who are so representative of Democrats in particular, and liberals in general, believe that it is somehow appropriate and logical to remove your sense of dignity, ownership and ability to protect yourself rather than teach the arrogant criminal thugs that the wise thing to do is leave other people and their property alone…or face the consequences.

And if your children aren’t able to keep up then that’s just too bad for them because you shouldn’t protect them from the vaunted ‘diversity’ that allows for child rape. After all, according to these socialist liberal Democrats your home should be like our borders, open to everybody to do as they please. And your children aren’t really yours, they belong to the commune…err,….the village.

Just who are these clueless Democrats?

Representative Mary Price ‘Pricey’ Taylor Harrison is your typical full on far left liberal presiding over one of the most liberal areas of North Carolina, Guilford Co. The county seat is Greensboro and the political break down is 60% Democrat, 40% Republican.

Harrison has some of the most atrocious ratings imaginable in the areas of abortion, business, voter fraud, fiscal conservatism, 2nd Amendment, religious freedom, and social conservatism.

It is quite clear that N.C. Republicans need to make every effort to unseat this 7 term abomination in our legislature.

Insko, like Harrison, has some of the most atrocious ratings imaginable in the areas of abortion, business, voter fraud, fiscal conservatism, 2nd Amendment, religious freedom, and social conservatism.

N.C. Republicans need to make every effort to unseat this 11 term abomination in our legislature too.