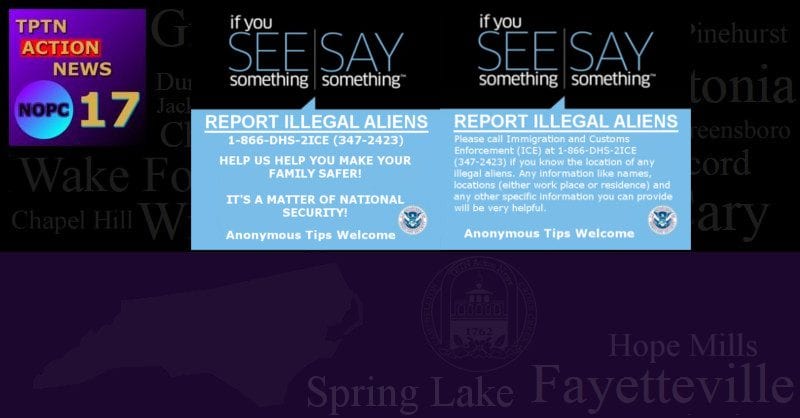 In light of the most recent violent rape of a 14 year old in an American school by illegal aliens the U.S. Immigration and Customs Enforcement [ICE] is stepping up its efforts to rid our country of these criminals.

ICE is ready to work very hard to do their job as efficiently, humanely and professionally as possible and now it’s up to us to do our part.


The reality is that if these ‘refugees’ want to have the freedoms that we do then it’s up to them to fight for them in their countries just as our forefathers fought to throw off the repressions of the English in our country. Our country always stands ready to promote democracy everywhere and provide assistance to them to retake their countries.

Two illegal-alien teenagers who were placed in ninth-grade classes at Montgomery County Schools, Maryland, have been arrested and charged with the brutal rape of a 14-year-old girl, and at least one of the boys had a pending deportation order from ICE.

The boys were identified as Henry Sanchez, 18, of Guatemala and Jose Montano, 17, of El Salvador. There has been no explanation by the school or by anyone in Maryland government just why these adult men were placed in such close contact with vulnerable juvenile children or why they even thought such an action would be safe in light of the obvious lack of appropriate sexual restraint in these cultures which is demonstrated over and over again.

It is now your civic duty to report any illegal aliens that you suspect are illegally present in our nation. For the safety of our children and elderly we just can’t allow illegal aliens to continue to remain in our country. It’s just too dangerous.

School teachers across this nation are especially encouraged to perform their civic duty and report any suspected illegal alien children or parents that they are aware of. Not only would reports from teachers serve to make their schools safer it would also serve to relieve the massive pressures that these illegal aliens put on funding intended for our legal citizens.

While teachers are not allowed to ask students if they or their parents are illegal aliens under a 1982 Supreme Court decision (Plyler v. Doe) it is perfectly permissible for a teacher to make notification to ICE on their own time and anonymously and let ICE ask that question. If a teacher suspects a child or parent is in this country illegally then they are quite simply civically and patriotically duty bound to report suspected illegal aliens. You don’t have to always be correct but you do have a responsibility to be diligent. It is better to err on the side of caution in this matter. Doing so may very well save a life or prevent an act of violence.

There are several ways of making a report to ICE about suspected illegal aliens and it is also possible to make an anonymous report to protect your identity so that you can’t be troubled or fired by quirky liberals or unpatriotic Democrats.

Online Email: You can go online to https://www.ice.gov/webform/hsi-tip-form and make your report. You do not have to give any personal information if you don’t want to and can simply put ‘Anonymous’ or ‘N/A’ in the personal information fields. You can easily access this link from a library computer or other public computer if you fear being identified by your boss. Under the column ‘Suspected Violation’ you will generally choose Fugitive Criminal Alien unless you have information that applies to another choice available.

ICE asks that you be as specific and as detailed as reasonably possible. You are encouraged to provide any additional identifying details such as places of birth, countries of citizenship, social security numbers, or license plate numbers and vehicle descriptions, in the notification if possible but even just reporting that “There are X number of suspected illegal aliens living in XYZ trailer park, Any City, Any State is helpful too. Any detailed information you provide will assist investigators as they look into reported violations.

While ICE does not provide status updates for tip information provided, you can be assured that it will be promptly forwarded to the responsible office for follow up action as deemed appropriate.

Although there is absolutely no guarantee that tip information provided will result in monetary payments, ICE has the discretion and statutory authorization to pay for information and/or evidence that is used in support of criminal investigations.