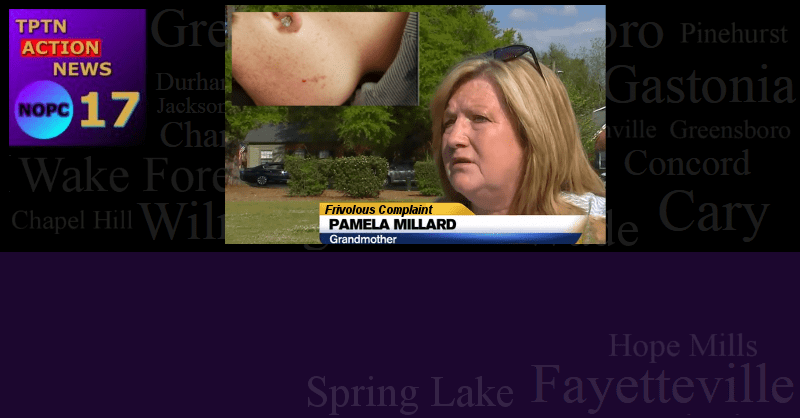 Cumberland Co. – The Cumberland Co. Sheriff’s Office has been burdened with a time wasting investigation dealing with a frivolous and specious complaint by the grandmother of 12 year old troublemaker, Tyler Skipper, who acted out and damaged property at a school dance.

The Cumberland Co. deputy, a school resource officer, reported that the civilly disobedient boy got into an altercation with another student at the dance, tried to flee the scene when confronted by the deputy who was doing his job to make the area safe for everybody from the actions of this miscreant juvenile and damaged property of other in the process of his disobedience.

Pamela Millard twisted the report whining that her grandson told her that the officer caught him, which hurt his neck, and handcuffed him. Suspicions are high that Millard is simply trying to position herself as a law suit lottery winner at our (taxpayer’s) expense.

Also at question are why this juvenile’s parents failed to teach their son how to properly respond to law enforcement when confronted by law enforcement for acting improperly. In fact, it brings to question just where this youth’s parents are and why the grandmother is even involved. Or is this a question of the grandmother having improperly raised a son or daughter who in turn failed at parenting too?

All law enforcement issued handcuffs meet the same standards with regard to detainee safety. Handcuffs are comprised of highly strengthened steel that won’t shatter, all edges are eased to get rid of sharp edges, and law enforcement officers are highly trained in the application of handcuffs.

Millard provided photographs that actually serve more to exonerate the deputy than impugn him.

In this photograph Millard attempts to cite as harm simple skin printing from the miscreant juvenile’s straining against the handcuffs during his temper tantrum at being restrained for his safety and the safety of others. Such markings are no more a sign of injury than are sleep lines one receives from simply laying on rumpled bed sheets all night. They are not only expected, they are quite harmless.

What Millard cites as a her grandson being injured by the deputy is a self inflicted friction abrasion as a result of her miscreant grandson repeatedly twisting his wrists in the handcuffs rubbing the skin off in a spot. It’s not a cut or a laceration. Simply a self inflicted friction abrasion. Certainly nothing that the deputy is responsible for.

And lastly a photograph depicting a mere trickle of blood staining his shirt from the grandson’s self inflicted friction abrasion.

Apparently Millard hoped to gin up feelings of horror and disgust with law enforcement with his picture but instead many are laughing at the overblown inflation of of less blood loss than one experiences with even a simple knee scrape or a dry weather nose bleed. Diabetics leak far more blood than this testing themselves for their blood sugar levels.

The truth is that this Cumberland Co. Deputy is a good person who would never hurt anyone who didn’t require hurting to bring about legitimate compliance.

The only ‘bad’ people here are the miscreant grandson and the grandmother, Millard.

Millard went as far as to tell Victor Skinner that, “He [Tyler Skipper] spent six days in ICU at Cape Fear for trauma, he had a spinal top [sic], and a MRI to determine if it was a physical issue.” But as anyone knows ICU is reserved for only those who are truly needy and near death and it is highly unlikely that the grandson was treated in an ICU for mental issues because, of course, we all know that mental issues are treated quite differently than this.

To wrap up it up, is entirely more likely that the slight blemish barely noticeable on Skipper’s face is the result of the altercation with the other youth than any fault of the deputy. Even more likely is that it is nothing more than acne that Skipper scratched earlier in the day and nothing at all to do with the deputy.

In light of the available evidence it is clearly appropriate that we as tax payers mock and ridicule Millard and demand that the Cumberland Co. Sheriff’s Office send her on about her way without the satisfaction of receiving any of our hard earned tax dollars just because the offspring of her absent offspring has violated the law and received a good dose of what the the future really holds for him if he continues on the path he’s on. It only hurt as much as he resisted.