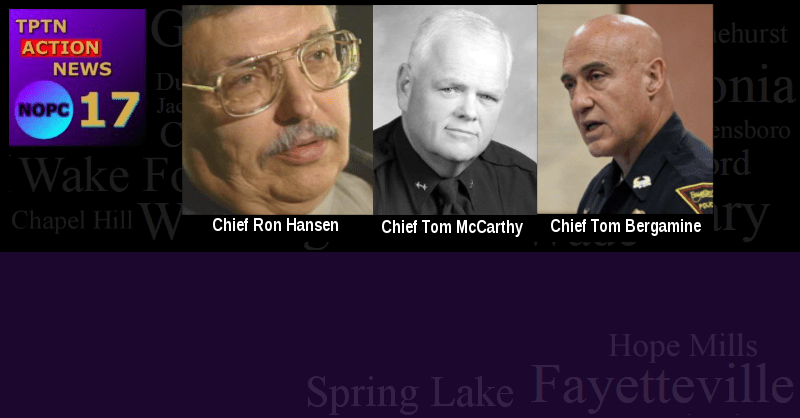 Fayetteville, N.C. – The citizenry of Fayetteville N.C. are demanding a police chief who can produce the same kind of crime lowering results as past Chief’s of Police Ron Hansen, Tom McCarthy and Tom Bergamine.

The latest crimes reports reflect that the recent liberal policing style of Harold Medlock and now his protege Anthony Kelly just simply aren’t making the grade as violent crimes are skyrocketing under what has been their collective administration.

In January, there were 99 aggravated assaults, compared with 57 for the same month last year. Many varied excuses were offered for why crime increased so drastically but no explanation resonated as dramatically as the fact that a departure from tried and proven police tactics is the cause of Fayetteville’s problems.

President Donald Trump’s tweet holds equally true locally here in Fayetteville as well as on the national and international fronts. If city council members and city manager don’t stop trying to win popularity contests by seeing who can be the most politically correct and hire a police chief who is not afraid to take the handcuffs off our fine police force and let them actually fight crime at its source then Fayetteville’s crime will only continue to get worse.

It appears that city manager Doug Hewett has just possibly made a courageous decision and chosen Fayetteville’s next police chief based on merit and accomplishments rather than the color of skin.

When Hewett called for questions after announcing that Chief Gina Hawkins would be Fayetteville’s next chief there was a decidedly pregnant silence borne out of shock that was pervasive in the council chambers before a question was posed.

Greg Barnes of ABC Channel 11 managed to stammer out a question asking if Gina Hawkins was selected simply because she was a female in a desperate attempt to seek some politically correct justification for the decision. Hewett quickly shot down that theory and maintained that neither sex, race nor ethnicity was a factor in her selection. Merely her education, attitude and accomplishments.

Jeff Thompson, a former radio announcer fired from WFNC 640 AM, and a well known racist activist who later worked at the radical WIDU 1600 AM levied an accusation in the form of a question in a contemptuously snide and rude manner to Doug Hewett;

“Mr. City Manager, do you realize what an unpopular decision this is locally?”

The question, which was certainly not representative of the whole of Fayetteville’s citizenry, sounded as if Thompson and his exceedingly small group of fellow self-styled social justice reformers believed that the city manager had made a horrible decision in not choosing a Black person to be Fayetteville’s chief of police. It was not readily apparent as to why Thompson believed himself qualified to be in a position to question the city manager’s decision on the matter. It’s a certainty that Thompson’s back handed slap in the face to Chief Hawkins did not go unnoticed by her. Apparently Thompson doesn’t believe Chief Hawkins to be ‘minority’ enough to deserve the position in his eyes. Chief Hawkins can be assured that Thompson doesn’t have ‘her’ best interests at heart.

Apparently Thompson and the others seated in the council chambers for the announcement were completely stunned by the city manager’s announcement of Gina Hawkins, Deputy Chief of the Clayton County, Georgia, Police Department as Fayetteville’s next police chief.

There appeared to be some kind of belief that Fayetteville’s next police chief would be a Black man, and most thought that interim chief Anthony Kelly was a ‘shoe in’ for the position simply because he just happened to be a Black police officer at the department despite his inability to reduce crime even a little bit, or at the very least keep it from raising, in the significant amount of time he was interim chief.

And a candidate who sued his own department? Well, nothing more needs be said about him.

The first lesson that Chief Gina Hawkins will need to learn is it would be in her best interest to just politely smile and make non-committal noises and gestures of acknowledgement as she listens to activists like Jeff Thompson, Troy Williams, Allen Rogers, Nancy Shakir, Elmer Floyd, the Pastor’s Coalition and their associates and then on safely disengaging herself from them and their nonsense move on to issues that are of real import to the city.

All that Chief Hawkins really needs to do is;

And if she’s smart she’ll be sure to demand in contract a generous severance package in the event of termination for any reason other than the commission of a crime. Chief’s and city managers don’t last too long around here anyway as we’ve seen.