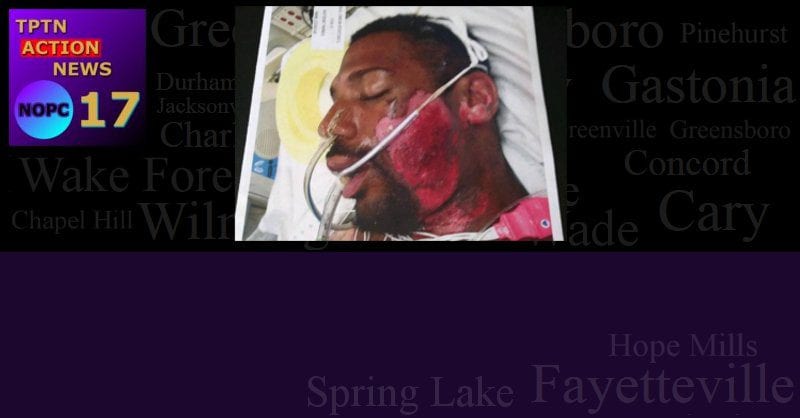 Sacramento, Ca. – James Bradford Nelson III remembers little about the afternoon last month when in his Black arrogance he struggled with law enforcement officers on the hot pavement causing its surface to sear his bare skin. But records tell the story of how he wound up in the UC Davis Medical Center burn unit, suffering with with self-inflicted severe wounds on the upper half of his body because he resisted a legitimate arrest.

The injuries occurred June 23 in a KFC parking lot when Citrus Heights police officers were forced to wrestle with him on the ground after receiving calls that he was acting erratically and violently at the restaurant. It was about 100 degrees that afternoon in the Sacramento area. The temperature of the asphalt parking lot would have been close to 170 degrees, according to estimates by the National Weather Service. An egg begins frying at about 144 degrees, and human skin “is instantly destroyed” at 162, according to the service.

On Monday, Nelson, heavily sedated by pain medication and still in intensive care with burns on his torso, face and buttocks, said he was unable to recall his interactions with police that day. His mother, Tarsha Benigno, described it as torture. Law enforcement described it as self-inflicted as a result of resisting arrest.

“He had a schizophrenic episode, and now he’s fighting for his life,” she whined in hopes of ginning up a win in a law suit lottery while sitting in a hospital waiting room with her husband. “Even a dog doesn’t deserve to be treated like this” she further whined but she didn’t have any comment about his resisting arrest and endangering others which resulted in the police being called in the first place.

Police acknowledge that they held a shirtless Nelson down in the KFC parking lot on Auburn Boulevard after he became “combative” and tried to flee from them. They said they poured water on him once they realized he had been burned and called paramedics for help. An ambulance rushed him to the UC Davis emergency room, where he later was transferred to the burn intensive care unit. Benigno said doctors told her he was unconscious for three days.

Nelson, 28, whose mother said was diagnosed with schizophrenia when he was a teenager, has since undergone three skin graft operations and could need further surgery. He may be in the hospital for another two weeks.

The hospital photograph shows the burns on James Nelson’s face and chest. The injuries occurred June 23, 2017 in a KFC parking lot when Citrus Heights police officers were forced to wrestle with him on the hot pavement after receiving calls that he was acting erratically.

Upon release, he faces charges of attempted robbery of a man’s wallet at the KFC, being under the influence of a controlled substance and resisting a peace officer. The charges are the latest in a series of mental episodes, arrests and incarcerations that have defined Nelson’s life since he was a juvenile, court records show. During the past 10 years, he has been charged with felony attempted robbery, burglary and larceny, and misdemeanor drug possession, among other offenses.

“He’s been caught up in a vicious cycle, in and out of the system,” Benigno said. “It’s terrible to worry every day about your child causing trouble because he is mentally ill.” However, Benigno couldn’t answer why she hasn’t taken the appropriate measures to insure that her alleged mentally ill son couldn’t pose a danger to himself or others.

Benigno and her husband, Barry, with whom Nelson lives in Stockton, are trying to piece together the events that led to her son’s current medical saga. Nelson, in a brief interview from his hospital bed, said he only remembers getting into a minor car accident earlier that afternoon and then “trying to find my way home” to Stockton.

Security video and records help paint a picture of what happened after Nelson rear-ended a driver at around noon a few blocks from the restaurant in the 7000 block of Auburn Boulevard in Citrus Heights.

Nelson, who grew up in Sacramento, was visiting cousins in the area that day, the Benignos said. Following the accident, they said, he used a borrowed phone to alert them that his white Nissan Altima was disabled and that he was waiting for police to arrive. He told them he would ask his cousin for a ride home.

“That’s when everything goes black,” said Barry Benigno, who works as a substitute teacher in Stockton.

A day passed, and then two, without word from Nelson, the Benignos said. It has yet to be determined whether he had imbibed some illegal drug that exacerbated his alleged condition. His mother, a teacher’s aide, said she tried to locate her son through relatives in the Sacramento area, and she and her husband grew increasingly worried when she was unable to locate him. On day three, a Stockton police officer showed up at the couple’s door, urging them to call UC Davis hospital. They found Nelson in the burn unit.