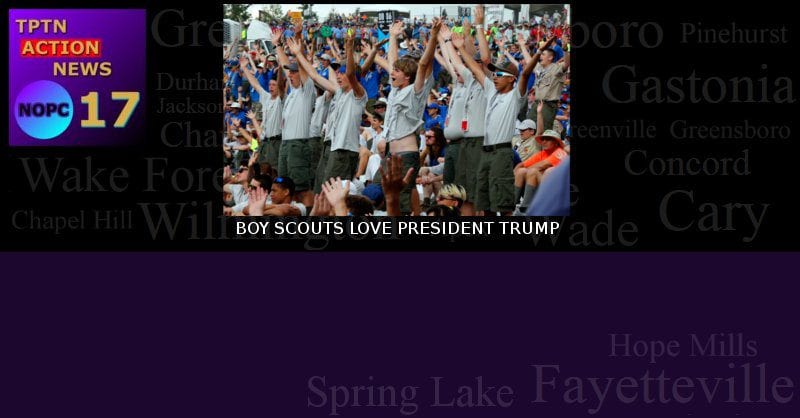 The weak leadership of the Boy Scouts of America are attempting to distance themselves from President Donald Trump after his stunning speech. 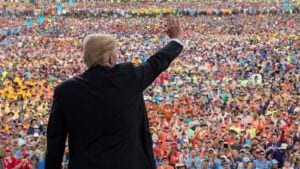 It should be noted however that it’s pretty obvious that the weak Boy Scout administration do not speak for the Boy Scouts themselves as evidenced by the Boy Scouts’ ground-swell positive response to President Trump’s speech.

The same weak administration infiltrated by liberals that folded and allowed ‘transgender’ girls pretending to be boys into the Boy Scouts.

Trump delivered a patriotic, campaign-style speech while speaking at the National Scout Jamboree on July 25. He took aim at former President Barack Obama, reminded Hillary Clinton and Democrats that they lost and – once again – blasted the “fake news media.”

“The fake media will say…’President Trump spoke before a small crowd of boy scouts today.'” Trump told the crowd. “By the way, just a question. Did President Obama ever come to a jamboree? And We’ll be back. We’ll be back. The answer is ‘no’ and – but – we’ll be back.”

“But do you remember that incredible night with the maps and the Republicans are red and the Democrats are blue,” the president added. “We won and we won.”

Trump also mentioned a home builder named William Levitt, who “went personally bankrupt, and he was now much older. President Trump related how Levitt said he experienced failure because he “lost his momentum.” A very good lesson to teach the Boy Scouts.

The weak leadership of the Scouts have since issued a statement in response to Trump’s speech attempting to speak for the astonishing massive yearly gathering of more than 40,000 Scouts.

“The Boy Scouts of America is wholly non-partisan and does not promote any one position, product, service, political candidate or philosophy,” the weak leadership said in a statement on July 25, according to news reports. “The invitation to visit the National Jamboree is a long-standing tradition and is in no way an endorsement of any political party or specific policies.”

While the weak liberal Boy Scout administration may not endorse President Trump, it’s very clear that the Boy Scouts themselves certainly do!

Trump brought back transparency, honest debate and accountability by calling out his critics and rivals during the patriotic speech. The attendees loudly and almost to a man…or boy chanted their complete support of President Trump. The jamboree brings thousands of scouts together from around the world to discuss leadership and trade ideas and it was just this that President Trump addressed.

Trump also took to Twitter to talk about health care. He blasted Democrats and thanked Senator John McCain for delivering his vote.

“ObamaCare is torturing the American People. The Democrats have fooled the people long enough,” the president tweeted Repeal or Repeal & Replace! I have pen in hand.”

“This will be a very interesting day for HealthCare,” Trump continued in a separate tweet. “The Dems are obstructionists but the Republicans can have a great victory for the people!”

“Sen. John McCain – Thank you for coming to D.C. for such a vital vote,” the president added. “Congrats to all Rep. We can now deliver great healthcare to all Americans!”