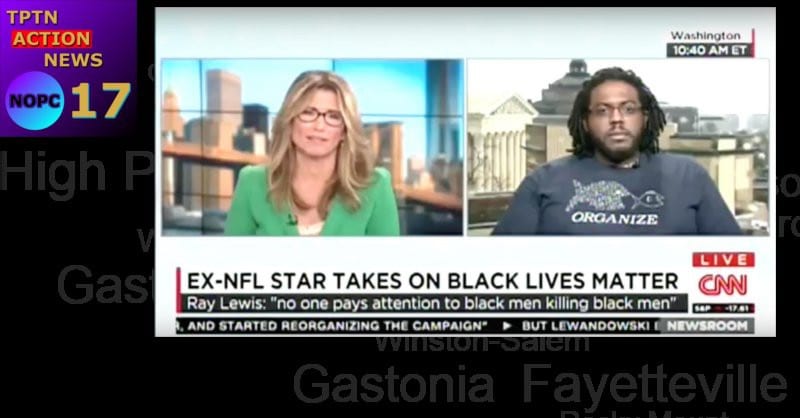 CNN’s Carol Costello wasn’t having any of Black Lives Matter organizer Aaron Goggans’ double-talk and held his feet to the fire about ex-NFL star Ray Lewis’ emotional video about Black on Black crime.

Black Lives Matter organizer Aaron Goggans suggested on CNN on Thursday that Black on Black crime is a “myth” and was quickly corrected with the facts that 90+ percent of black deaths are at the hands of young Black men.

“It’s important to talk about the myth of black on black crime. It’s just that – a myth,” Aaron Goggans, a Black Lives Matter organizer in Washington, D.C., told CNN anchor Carol Costello. Moments later when Goggans realized that Costello wasn’t simply going to give him an affirmative action pass and let him tell all the lies he wanted he attempted to back track and lie by saying that the Black Lives Matter movement is trying to resolve black on black crime. But when pressed on his statement, Goggans moments later admitted that black on black crime does exist. Goggans then felt that he could minimize the damage to his credibility by saying, “I’m saying that inter community crime happens in all communities across the country and it is a problem that the movement of Black Lives is focusing on,” Goggans said.

I’m trying to figure out if black lives really matter,” Lewis said in a video posted to his Facebook page on Saturday. “The March murder rate rose by 29 percent, but we’re not rioting in the streets over black-on-black crime.”

“I’m trying to figure out in my mind why no one is paying attention to black men killing black men. Why do we always find ourselves as the victims, and now we have the separation once again that we’re being victimized because of one bad white cop, two bad white cops, three bad white cops, killing a young black brother. But every day we have black-on-black crime, killing each other,” Lewis said.

Lewis previously made headlines when he issued a “message for the rioters in Baltimore” last year, telling kids in his city to “get off the streets” and reminding them that “violence is never the answer.”