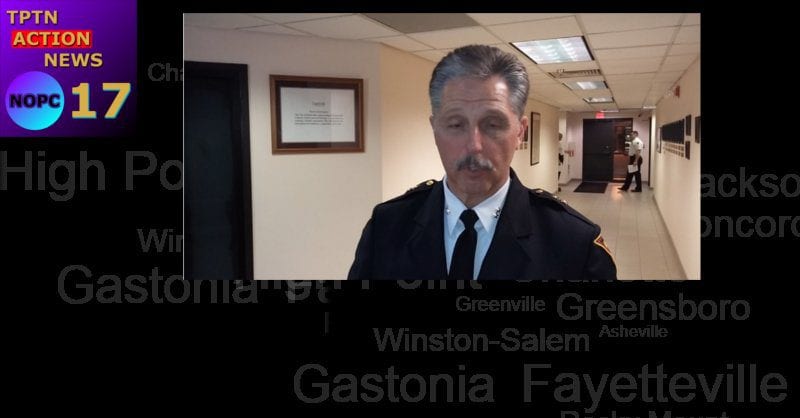 Fayetteville, NC – The Fayetteville Police Department is undergoing a mass exodus and the employees are saying that Chief Harold Medlock is the primary reason for the unprecedented resignations that are occurring this year.

Under a Freedom of Information Act request the Fayetteville Police Department’s own numbers were obtained and they paint a very disturbing picture.

Since January 1, 2016 the police department has experienced a loss of 31 [or 44 depending on which part of the report you choose to believe] employees with 21 of those being resignations.

Of those 21 resignations 10 are police line officers.

The police department’s own yearly loss reports reflects the disturbing uptick in losses incurred in this the first quarter of this year are way higher than normal.

Losses reported at the end of April 2016 are already at 20 employees! And only a third of the year has passed!

Some Fayetteville Police employees spoke about this issue on the condition of anonymity.

A captain on the department said, “One of the factors driving them away is Medlock’s attitude towards them. I was at a Comstat meeting and one officer asked about the low morale on the department. Medlock replied ‘Look, let’s get something straight right now. That’s not my problem, that’s your problem.’ …and from that point all the officers on the department realized that Medlock was out only for himself. That’s no way to talk to subordinates. I lost all respect for that man right then as I’m sure many others did.”

Another officer said, “It’s the illegal things that he’s doing and expects the officers to do like the quotas he putting on traffic stops. Medlock has ordered the Traffic Officers to make 30 traffic stops a day and that a warning or state citation has to be issued for each stop. And worse, expired tags or any regulatory stops don’t count either; moving violations only. Now do you really think that there are going to be 330+ speeders or road rage violators every shift? Some of the younger inexperienced officers are going to be so afraid of losing their job that they will be stopping people just to give them a warning even though they didn’t do anything wrong. That’s why quotas are illegal.”

The officer went on to say that the officers are being told that it’s not a quota, but rather a ‘performance standard’. A rose by any other name.

G.S. 20-187.3 provides that “the Secretary of Crime Control and Public Safety shall not make or permit to be made any order, rule, or regulation requiring the issuance of any minimum number of traffic citations, or ticket quotas, by any member or members of the State Highway Patrol.”

Surely what’s illegal for the NC Highway Patrol would also be illegal for counties or municipalities in this state.

So now the Fayetteville Police Department officers under Medlock’s administration are making stops simply to fulfill quotas and not because a driver has committed any violation. Apparently Medlock believes that if a ‘warning’ is issued in cases where no true violation exists then many would just go about their lives and count themselves lucky leaving him ‘looking good’ in the eyes of the public. What such actions do is leave an ever growing number of citizens with a bad opinion about the Fayetteville Police which is very bad for the department. Quotas encourage stops that may not be warranted.

One officer said, “In one ‘Special’ [a police operation that’s not normal operations] there were 150 stops made. 130 of those stops were given warnings while only 20 stops involved real violations that could be cited on a state citation. We had bugged the hell out of 130 people just to make Medlock look good. It’s ridiculous! That’s what made me decide to seek employment with the Sheriff’s Office. I’d rather take a cut in pay and work there than continue like this.

A line sergeant said that there are four or more traffic officers who have asked to go back to a patrol line unit because of the illegal quota system being pressed on them. They believe meeting quotas like that are a violation of their oaths of office and violate the citizen’s trust in them. The line sergeant suggested that maybe the citizens need to contact their city council members and demand that they do something about this. He said that many officers on the department would appreciate the citizens intercession on their behalf in their honoring their oaths of office which includes not disrupting citizens who are simply going about their daily lives committing no crimes just to fulfill a dictator’s quota.

Quotas make sense in a factory setting where ‘x’ number of widgets are produced in ‘x’ number of hours but the profession of law enforcement is anything but comparable to factory work. People aren’t widgets. Would you want to be seen by a doctor at a hospital who has been told that he must diagnose 30 cases of cancer every day or he would lose his hospital privileges? Of course not. That would be stupid. So why would it be any more tolerable for law enforcement officers to be placed under quotas?

Law enforcement officers, like doctors, are highly trained to observe and detect that which is wrong or bad in a given area. To demand that they toss aside all their training and perform like a factory worker is micromanagement and the sign of a very toxic supervisor. It’s a sign of a supervisor who hasn’t learned how to lead and can only demand and boss people around.

A lieutenant on the department said that the overtime being forced on the officers because of the high number of resignations lately caused by Medlock and his leadership style is another reason good officers are resigning and going to other agencies like the Sheriff’s Office.  “All these officers are miserable. They dread coming in to work because they know that their own chief views them as nothing more than peons to be abused for nothing more than to enhance his media persona. What does it tell you when good officers are willing to take a cut in pay and work ‘at the pleasure of a sheriff’ than for the Fayetteville Police Department or go through the burdens of having to move across the state to work for the Highway Patrol like three of our officers did?”

Another lieutenant said “You wouldn’t believe how desperate officers are to get away from Medlock and the department. Those who are prior military and can buy back their retirement time to retire from the department quicker are doing just that. Used to be that some officers wouldn’t retire right away because they liked it here. Remember Cannady, Weathers? No more. They are getting out of here just as quick as they can. Those who can retire don’t stay one second longer than they have to be here because of Medlock.”

Without question the men and women under the command of Fayetteville Police Department’s Chief Medlock are the finest law enforcement officers that the State of North Carolina has produced. That is why other agencies like the Highway Patrol, Sheriff’s Office, and NC DMV, to name a few, are very happy to take those officers Medlock has driven away. This has to stop. The city council and the acting city manager need to take visible actions to stem the tide of good and dedicated officers leaving the department over Medlock’s toxic leadership. It’s not an opinion, the proof is in the department’s own reports. Now is the time to act.

Some point to accolades Medlock desperately sought and received by Attorney General Loretta Lynch as some kind of vindication for the state of the police department. Higher crime, higher murder rate, quotas and experienced law enforcement officers leaving in droves? Does the approval of Attorney General Lynch even matter to those who are victims of the drastically higher crime in Fayetteville? Is this what the city council hired Medlock to accomplish? Isn’t it time that the city council stop being concerned about what’s best for Medlock and his narcissistic penchant for media exposure and be more concerned about what’s best for Fayetteville?

It should also be noted that when the request for the ‘Authorized Strength’ report was made for research for this article the Fayetteville Police Department administrative staff attempted to evade their responsibilities under the NC FOIA statutes [N.C.G.S. § 132-1 and § 132-6] by first directing us to their online police database which did not contain the same information as requested.  Then by sending us one page of the multi-page report ‘Authorized Strength’ report which depicted the racial makeup of the police department even though race had nothing to do with the issue. And only then finally releasing the complete and correct information only after being reminded that being taken to court over the public information release was an entirely viable option. See the below communications attesting to the struggle with what Medlock falsely touts as a more transparent department. Apparently, in Medlock’s regime, according to the very first page of the report, ‘Position Control’ is spelled “Authorized Strength by Position ID” (see third letter below).

Do you feel like you’re a victim of a ‘Quota Stop’? Do you find this disturbing? If so, you might want to express your feelings about it to your city council member. That’s what they’re there for;

Click here to email the Mayor and the City Council