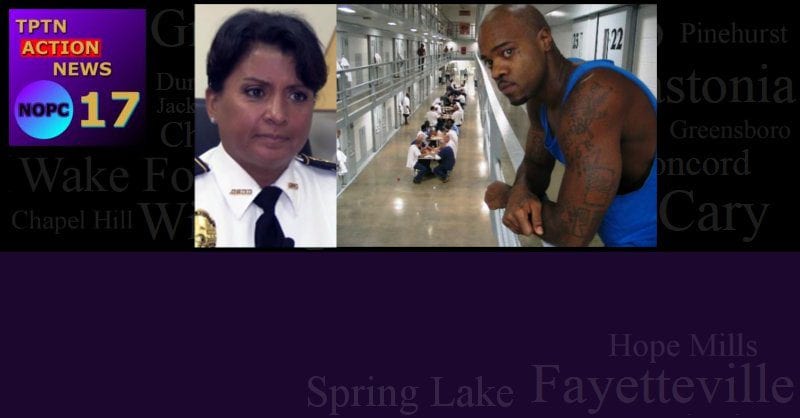 Despite having had a Black interim police chief, Anthony Kelly, who allowed crime rates to soar for the past 11 months, a liberal police chief before that who marched with the BLM activists (who are now recognized by North Carolina Senators as domestic terrorists), and numerous taxpayer and charity funded handouts, Blacks still disproportionately commit crimes in Fayetteville at a factor of up to 7 to 1 in comparison to the other races.

Fayetteville is unique and considered a plurality city because the number of each race present does not reach an absolute majority (over 50%).

Fayetteville’s population is primarily 46% White, 42% Black with a sprinkling of Asians, Indians, Pacific Islanders and those who claim a mixed race.

This is important to know because it matters when analysing crime trends. [See explanation below] 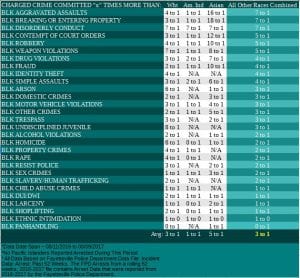 Analysis based on Fayetteville Police Department’s own data acquired from their data portal clearly shows that Blacks in Fayetteville disproportionately commit crime in nearly every major crime category with the singular exception of ‘panhandling’.

At first this seems to be an inexplicable anomaly but on reflection it is quite unusual to see a Black person panhandling in the streets of Fayetteville, but when one considers that nearly every entitlement or charity is primarily race-based and directed towards Blacks the finding is not nearly so confusing. The institutional racism inherent in many of Fayetteville’s charities is quite evident.

At issue for Police Chief Hawkins is the astoundingly disconcerting fact that Blacks are responsible for home and business break-ins and violent assaults in Fayetteville at a rate of seven (7) to one over all the other races.

To clearly understand the difference ask yourself;

As you can see 7 times anything, or 4, or even twice anything quickly becomes intolerable. It’s not just numbers on a page. It’s the reality.

Fayetteville Police Department’s data clearly shows that Blacks abuse this community criminally at a rate of 2 to 7 times more than any other race in this community.

Even more astonishing is the fact that Blacks are actually committing the crime of slavery of others (Human Trafficking) twice as much as any other race! In Fayetteville! How can it be that the Black community can tolerate this activity among its members especially considering the fact that their victims are more often Black people?

Respect for our Courts

With charges for ‘Failure to Appear’ and charges for ignoring court orders of all kinds at a rate of 5 to 1 in comparison to all other races it’s quite evident that Blacks have a serious contempt for our courts. Blacks simply do do respect our court system and treat our judges as a joke that they need not obey.

Even more troubling is the apparent reality that our judges and district attorneys are letting them get away with it.

But this very important issue is not Chief Hawkins’ responsibility alone. While it is Chief Hawkins’ responsibility to catch the criminals regardless of their race a far larger burden rides the shoulders of the Black community in the form of Blacks parents, Black men abandoning their children, and groups like the Fayetteville Urban Ministry or the Fayetteville-Cumberland Human Relations Commission.

While we see the unfettered and rampant disbursement of charitable contributions primarily to the Black community on the pretense that it is Blacks who are the most ‘oppressed’, what we do not see is any effort to mitigate the the Black propensity for criminal activity by the Fayetteville Urban Ministry. It is certainly time for them to develop a program to address this problem as it is certainly a basic command of God’s to not covet thy neighbor’s house nor any of thy neighbor’s servants, animals, or anything else, as well as thou shalt not murder.

Now many good and honest Christians have been conditioned to fall for Satan’s desire that no one be judged, a tactic commonly used by Black activists and White apologists but the simple truth is irrefutable.

Jesus said that He came not to abolish the law, but to fulfill it. In other words, the Old Testament law, even in Jesus’ day, was still in force and Jesus accepted it. The Church has always taught that only God can judge if a man SINS but men can (and are mandated by God to) judge ACTIONS.

Deuteronomy 16:18-20 “Judges and officers shalt thou make thee in all thy gates which the Lord thy God giveth thee, throughout thy tribes; and they shall judge the people with just judgment.”

And law enforcement officers even have the special blessing of God;  Romans 13:4 “For the one in authority is God’s servant for your good. But if you do wrong, be afraid, for rulers do not bear the sword for no reason. They are God’s servants, agents of wrath to bring punishment on the wrongdoer.”

And Fayetteville-Cumberland Human Relations Commission is supposed to be a commission that studies problems of discrimination in any or all fields of human relationships and encourage fair treatment and mutual understanding among all racial, ethnic, sex and age groups. [Clearly this means Whites also.] The commission is supposed to promote programs and seek solutions to these problems.

Since the Human Relations Commission is so keen on training, it would be nice if they would take the time to train Blacks to not be such prolific criminals so as to promote ‘fair treatment’ between Blacks and their victims of other races as well as the victims of their very own race. If it is the intent of the Human Relations Commission to indoctrinate the populace to be more accepting of Black criminal activity then failure is imminent and they should be disbanded for wasting taxpayer dollars.

City Manager Doug Hewett should in fact make it a permanent yearly goal of the Human Relations Commission that a minimum of 50% of every dollar they receive must be spent on advertisements directed towards the cessation of black criminal activity (20%), mandatory training of Fayetteville resident criminals that crime is not respecting diversity (30%), and that failure to do so will result in the loss of city support. The County Manager, Amy H. Cannon, should do the same with county contributions.

At an annual expenditure of $362.305 (Section E-30) in taxpayer funded dollars received from Fayetteville citizens one would think that they could make a difference in this issue if they only tried. Fayetteville-Cumberland Human Relations Commission certainly receives enough taxpayer dollars to make the attempt.

Since the solution clearly isn’t “give, give, give” which seems to only encourage laziness and an unwarranted sense of entitlement it very well may be time to “take”; 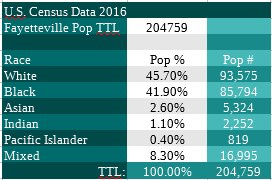 In order to make fair and accurate comparisons between racially cultural criminal aberrations one needs to take into account that there are major differences between the number of each race in the Fayetteville area.

It would certainly not be fair to the Black community to compare the actions of 42% of them to the actions of a mere 2% of Asians or 1% of Indians nor would it be accurate to do so.

NOTE: In the real world 2+2=4. Your feelings are hurt? Tough…2+2 STILL EQUALS 4…not what happens to be politically correct this week. You think this might oppress Blacks? So? 2+2 still equals 4. Common core math only works when your a child in school and the liberal teacher is trying to indoctrinate you into liberalism. In the real world only the correct answer counts. And it doesn’t care about your feelings.

To correct this imbalance you simply divide the lesser number of a given race into the greater number of the other race in the comparison.

Example: We know from the U.S. Census data that 41.90% of the Fayetteville population is Black which equates to 85,794 Black people.

We now have the information we need to calculate “X to 1”.

As we can see from the raw data Blacks committed 255 aggravated (violent assaults usually with weapons and usually resulting in serious injuries) assaults while Asians committed 1, Indians 6 and Whites 76. It would be unfair to compare Blacks (46%) to Indians (1%) by comparing 255 to 6. To make it fair and accurate we have to compare the number of crimes committed by 85,794 Blacks to an equal number of Indians. Knowing that there are 38.09 times less Indians than Blacks we simply take the six assaults committed by Indians and times it by 38.09 to get the correct number of assaults that would have been committed by 85,794 Indians which would have been 229. As one can see this makes a very big difference. To obtain the “X to 1” ratio all one has to do now is divide 255 by 229 which equals “1” when rounded up or down to a whole number.

And to get the average “X to 1” of all the races (A, I, W) combined is simple too. Just add the three together and then divide by three. 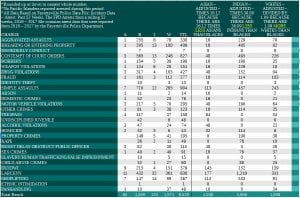