Fayetteville, N.C. – A WFNC 640 AM radio commercial announcer, Jeff Goldberg, childishly whined that Robertson has refused to appear on his liberal slanted snipe show because, “He’s mad at me for something I said and did on the air a few weeks ago.”

Anyone that truly knows Mayor Nat Robertson knows that “mad” is about the last thing that he could be accused of because for the Mayor to have feelings of anger towards Goldberg the Mayor would have to have some kind of emotional investment in Goldberg as a person. That certainly does not exist and never did.

Mayor Robertson calmly remarked barely noticing the question, “I’m not afraid to answer questions in reference to the issues,” he said. “But when you get off track and get personal, I don’t have time for it.”

Clearly no anger involved. Just a case where childish foolishness is summarily dismissed by an adult with far more important things on his plate to deal with than Goldberg’s liberal childishness.

Political candidates all over are taking a cue from President Donald Trump and no longer falling for the PC whines of liberals who are not being allowed to viciously attack, lie about and maliciously impugn conservative candidates. In the similitude of President Donald Trump, liberals are being relegated back to the obscurity from whence they came.

Quite frankly, Mayor Nat Robertson’s attitude is the kind of attitude that we need in more of our American politicians.

A local station radio commercial announcer simply does not have that kind of impact on the life of the prestigious such as our distinguished Mayor Nat Robertson. Especially one who clings to a childish nick-name like “Goldy” which true adults give up at the onset of puberty.

Thousands of local citizens have found it humorous that Goldberg attempts to cast himself in the light of a professional talk show host akin to Sean Hannity or Rush Limbaugh when in reality he does nothing more than announce commercials at an obscure little radio station that doesn’t even have the broadcast power to cover the community in its entirety. The delusions of liberal arrogance are truly boundless. 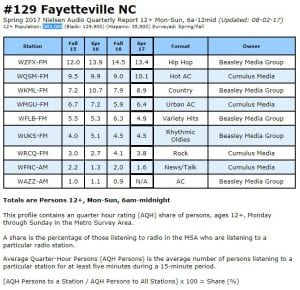 Goldberg claimed his show has about 20,000 listeners. However an August 2017 Neilsen Ratings report reflects WFNC only having a 1.6% of the Fayetteville, N.C market [383,000 persons over age 12] which equates to only 6,128 people. Logic tells us that the bulk majority of these people are listening to Rush Limbaugh, Phil Valentine, Michael Savage, Mark Levin or Sean Hannity. The 128 listeners of that 6,128 are probably closer to the truth regarding Goldberg. Clearly Goldberg has a severely inflated opinion of his reach. The facts show a different story than what Goldberg reported.

Without Mayor Nat Robertson to abuse the ‘forum’ is certain to be a very dull, uninformative, valueless liberal echo chamber that won’t be worth tuning in to hear. Listeners should probably continue to wait until 10:00 am to start listening with Chris Plante rather than waste their time with Goldberg’s immature talentless drivel. There are plenty of regional Mexican radio stations with clear reception that would be far easier on your ears than Goldberg’s frantic natterings.

2 thoughts on “Fayetteville AM Radio Commercial Jockey Schooled by Mayor”