U.S.A. – The U.S. Government is starting to open discussions regarding the nationalizing and governmental regulation of social media under Eminent Domain and the methodology cited in the Federal Possession and Control Act (1916).

Such an occurrence is not in any way unusual or even unprecedented. Facebook, Twitter, YouTube and other venues of social media could become government controlled like the Railroads, Postal Service, Air Traffic Controllers and Telegraph and Telephone systems have come under government control in the past.

In a 1913 report to the U.S. Senate, prepared under the direction of the U.S. Postmaster General, declared:

The founders of this nation were keenly alive to the importance of keeping exclusively under Government control all means of communication, and therefore provided in the Constitution that “the Congress shall have the power to establish post office and post roads.”

They specified nothing concerning means of transportation or methods of distribution, but wisely left to future generations a broad provision under which they would have the right to avail themselves of such improved means of communication as might be discovered and developed.  It was clearly their intention that the Government should control all means for the transmission of intelligence.

We recommend that Congress declare a Government monopoly over all telegraph, telephone, and radio communication and such other means for the transmission of intelligence as may hereafter develop.

This advice was clearly heeded upon the invention of television as evidenced by the creation of the Federal Communication Commission. It most certainly applies to such means for the transmission of intelligence such as Facebook, Twitter, reddit, YouTube, Et cetera.

On July 22, 1918, the U.S. government declared that it was taking possession and control of all U.S. telegraph and telephone systems. The government formally took over about 53,000 telephone companies. President Woodrow Wilson, a member of the Democratic Party declared;

I, Woodrow Wilson, President of the United States, … do hereby take possession and assume control and supervision of each and every telegraph and telephone system, and every part thereof, within the jurisdiction of the United States, including all equipment thereof and appurtenances thereto whatsoever and all materials and supplies.

In 1917 President Woodrow Wilson decided on nationalization of the railroad and announced the nationalization of a large majority of the country’s railroads under the Federal Possession and Control Act. Two days after his announcement, the United States Railroad Administration (USRA) seized control. Wilson forced the railroad management to accept union demands for an eight-hour work day. William McAdoo, Wilson’s secretary of the treasury, was appointed Director General of Railroads. The railroads were subsequently divided into three divisions—East, West and South.

The Air Commerce Act of May 20, 1926, is the cornerstone of the federal government’s regulation of civil aviation. This landmark legislation was passed at the urging of the aviation industry, whose leaders believed the airplane could not reach its full commercial potential without federal action to improve and maintain safety standards. It was determined that air service was then, and would continue to be, critical to the development of the United States and that a service so critical could not be left to the vagaries of favoritism, corporate greed, unionism work strikes and commercial bias.

The word property doesn’t always mean physical property; it can include contracts, copyrights and patents. The government took intellectual property during WWI when it took vacuum tube patents and put them in a public pool. Owners were rewarded from the licensing pool and out of this, other inventors created FM radio.

A fundamental tenet of patent law is that the owner of a patent can preclude others from using or manufacturing inventions that the patent covers. Few people realize, however, that there is a major loophole regarding the U.S. government.

In other words, if the U.S. government – or any of its contractors or subcontractors – uses or manufactures an invention covered by your patent, you cannot get a court to stop that use or manufacture, and you cannot sue for infringement. Your only judicial remedy is to seek “reasonable and entire compensation” in the sole court (located in Washington, D.C.) that handles non-tort claims against the United States. You also can’t get any of the other remedies that would have been available had the infringer been a private party-an injunction, treble damages for willful patent infringements, or any meaningful statutory damages for copyright infringements.

The U.S. Supreme Court recognizes that the eminent domain power conferred under the Fifth Amendment applies to the states via the Fourteenth Amendment. When read literally, private property must be taken to invoke the Takings Clause.  Land, because of its limited nature, is coveted by the government for particular uses which are easily attributable to the public interest.  Hence, the Clause chiefly applies in cases involving the disposition of real property. In such cases, the Court has deferred to legislative judgment when analyzing public need for the use of the takings power. If another form of private property exhibits such a public need, such as Facebook, Twitter, reddit and YouTube or their respective software codes, it is reasonable to believe that the Court would show similar deference when analyzing such a case under the Eminent Domain Clause.

Therefore, because these suits are based on eminent domain (government taking of private property or intellectual property for public use), courts have held that the proper measure of recovery is a “reasonable royalty” based on “what the owner has lost, not what the taker has gained.” Litigating a reasonable royalty is expensive and time-consuming. So even though Section 1498(a) allows individuals, nonprofit organizations and small companies (no more than 500 employees) to recover litigation costs, often the most realistic approach is to file an administrative claim (i.e., start negotiating) with the applicable government agency. Under these circumstances, however, government bureaucrats generally will have the upper hand, knowing that many patent owners lack the staying power to bring suit if negotiations end unfavorably.

It is now being stated that social media like Facebook, Twitter, reddit and YouTube has become so critical to the exchange of information, or ‘intelligence’, as it is referred by a report by the U.S. Postmaster General as cited earlier, that it has become incumbent on today’s government to seize control of it and regulate it to ensure that the communication platform is fair and politically indifferent to United States citizens for the good of the country.

Social media like Facebook, Twitter, reddit, Youtube and others have become so integral to the exchange of information (intelligence) between businesses, citizens and creators of many various and diverse renderings of ideology, scientific exploration, political discourse and material ingenuity that it is no longer possible to meaningfully engage with the world without it.

“They [social media] also have massive responsibility because they’re dealing with people’s freedom of expression on such a large scale that people cannot opt out and still meaningfully engage with the world.” ~ Morgan Weiland, Stanford Law School’s Center for Internet and Society

President Donald J. Trump said that it is “very dangerous” for social media companies like Twitter and Facebook to silence voices on their services. President Trump previously criticized the social media industry in a series of tweets that unnamed companies were “totally discriminating against Republican/Conservative voices.” In the same post, President Trump said “too many voices are being destroyed, some good & some bad.”

“I won’t mention names but when they take certain people off of Twitter or Facebook and they’re making that decision, that is really a dangerous thing because that could be you tomorrow.” ~ President Donald J. Trump

Social-network operators are protected by a section of the Communications Decency Act that for two decades has absolved Internet companies of any legal liability for the content that their users create. This effectively eliminates many of the excuses that entities like Facebook, Twitter, reddit and YouTube use to justify their actions of shadow banning and outright bans.

“They are learning, unfortunately the hard way, that when you occupy a space in our society that allows people to express themselves, you need to let people express themselves equally and fairly, because that is the expectation,” Neil Richards, a law professor at Washington University School of Law said. “They have tremendous effect on our lives and have become such a major part of the ecosystem of free expression and public debate that you can’t have a public campaign anymore without a Twitter or Facebook presence, and that makes them quasi-public, more like a power company or a cable company or newspaper.”

Being compared with a public utility — a legal classification that applies to telephone and cable companies — is probably something tech companies want to avoid, experts said. It would invite a new level of scrutiny to the networks and how they’re allowed to operate. And that level of government sanction would bind them to the First Amendment’s protection of speech and expression which would be a good thing to have happen.

I, Donald J. Trump, President of the United States, … do hereby take possession and assume control and supervision of each and every social media system, Facebook, Twitter, reddit, YouTube, Google or similar, and every part thereof, within the jurisdiction of the United States, including all equipment thereof and appurtenances thereto whatsoever and all materials and supplies.

And President Donald J. Trump would be well within his Executive Office Authority to do so. 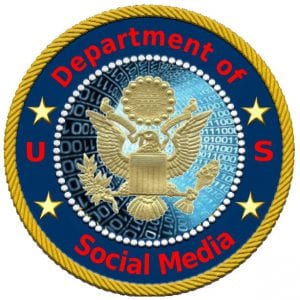 President Donald J. Trump orders the creation of a national social media system based on Facebook’s code that is administered by a government entity, possibly named the Department of Social Media under the FCC who already regulates the internet. Government then forces Facebook, Twitter, reddit, or YouTube into filing an administrative claim (i.e., start negotiating) with the applicable government agency for any royalties they may claim. Of course, government bureaucrats will have the upper hand, knowing that many patent owners lack the staying power to bring suit if negotiations end unfavorably, even one like Facebook. Again, if the U.S. government – or any of its contractors or subcontractors – uses or manufactures an invention covered by your patent, you cannot get a court to stop that use or manufacture, and you cannot sue for infringement.

President Donald J. Trump orders Facebook’s, Twitter’s, reddit’s, YouTube’s or other social media’s intellectual property placed in a public pool and licensed out at a reasonable cost to be remitted to Facebook, Twitter, reddit, YouTube other social media and allowing others to create social media ‘books’ like Conservativebook, SecondAmendmentbook, or even Trumpbook. In this way the elemental constitutional concept of freedom of speech would be preserved.

Subsequently, the only end user rules would be the U.S. Constitution, federal and state laws. Keep in mind that children would not be excluded from a government controlled social media site as one of the goals is to be educationally beneficial and expose children to “diverse” viewpoints.

Most importantly, if social media was smart they would adopt the U.S. Constitution, federal and state laws as their rules for usage model and cease their unjustified biases before they do become a government entity for the good of ‘We the People’.

It actually could happen. As we can see, it’s happened before!