Cumberland County, N.C. – Sheriff’s Deputies with the Cumberland County Sheriff’s Office have reported that acting sheriff Ennis Wright’s campaign has disgustingly and predictably taken a page out of the Democrat playbook and allegedly been spreading lies and misinformation to employees of the sheriff’s office and Cumberland Co. voters. 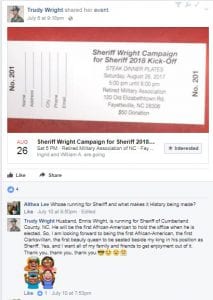 First, Ennis Wright’s wife proclaims that Ennis Wright will be a “King” in Cumberland County and that she will be an equally powerful “Queen” holding court over those of us whom they apparently view as peasants who, to her, are a crude uncouth ill-bred people lacking culture or refinement.

A currently serving deputy sheriff who will not be named to protect his career said; “Apparently Wright’s wife doesn’t understand that around here we elect sheriff’s based on the content of their character and not the color of their skin as taught us by Martin Luther King. Her comment is shameful and shows disrespect for our diverse community.”

Cumberland Co. community members are openly concerned that candidate for the office of sheriff, Ennis Wright, would tolerate such racism and arrogance in his family and wonder if it is a sign of Ennis Wright’s own values and mental attitude.

Then, the acting sheriff Ennis Wright comes under investigation by the Federal Office of Special Counsel for Federal Hatch Act violations.

The complaint being assigned to a Hatch Act Unit attorney and given a case file number (HA-18-3915) indicates that they believe that probable cause exists that serious violations of Federal laws have been committed. 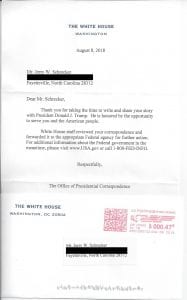 Nearly 20 Cumberland County residents filed a formal complaint with the Federal Bureau of Investigations (Charlotte), the Hatch Act Unit of the Federal Office of Special Counsel and even forwarded a copy of the complaint to President Donald J. Trump requesting assistance. The residents co-signed the complaint spearheaded by Jerry Schrecker, a retired sergeant of the Fayetteville Police Department.

Unsurprisingly even the White House felt that acting sheriff Ennis Wrights unethical and illegal acts with taxpayer dollars merited investigation as shown by their letter of response to Schrecker.

And now, all the lies being allegedly spread by Wright’s campaign.

It’s all too clear that it’s time to ‘Drain the Swamp’ in Cumberland County and elect a sheriff who won’t allow or condone such swampish behavior in the Cumberland County’s Sheriff’s Office that makes all of us a laughing stock statewide and federally like Ennis Wright does.

It took a Republican to bring our country back to the path of greatness. Just imagine what greatness would come to Cumberland County if there was a Republican in the Sheriff’s Office?