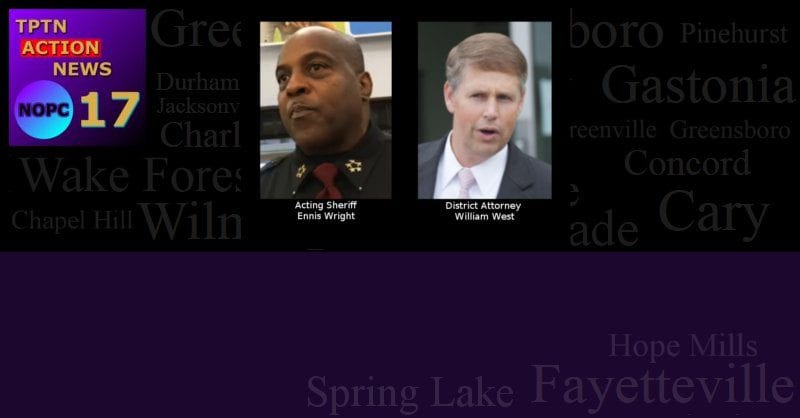 This comes after a very troubling and atrociously racist attitude displayed by Ennis Wright’s wife, Trudy Wright, and quite possibly by Ennis Wright himself that he would be the first African-American “King”, and she the “Queen” of Cumberland County law enforcement. 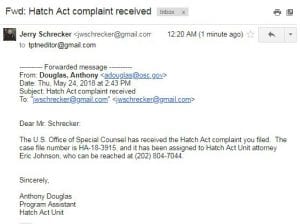 The complaint being assigned to a Hatch Act Unit attorney and given a case file number (HA-18-3915) indicates that they believe that probable cause exists that serious violations of Federal laws have been committed.

Nearly 20 Cumberland County residents filed a formal complaint with the Federal Bureau of Investigations (Charlotte), the Hatch Act Unit of the Federal Office of Special Counsel and even forwarded a copy of the complaint to President Donald J. Trump requesting assistance. The residents co-signed the complaint spearheaded by Jerry Schrecker, a retired sergeant of the Fayetteville Police Department.

The Charlotte division of the FBI declined to confirm, or deny, that there was an investigation being conducted of the District Attorney’s Office or acting sheriff Ennis Wright and went on to say that they couldn’t comment on any aspect of the case “due to the severity of the allegations.” Whether this is in reference to Wright, or West and the District Attorney Office, or both, is unknown.

A very troubling aspect of the complaint revolves around the Cumberland County District Attorney’s Office clearly refusing to perform their duty with Democrat affiliated District Attorney William “Billy” West citing through ADA Baxter Worth Paschal that they didn’t see a problem with Wright’s actions. This was even after being made aware of North Carolina General Statute § 153A-99 which states “No employee may use county funds, supplies, or equipment for partisan purposes, or for political purposes…”

Apparently DA West would have everyone believe that a motorcycle political fun run somehow equates to a funeral escort for “safety” reasons and that any candidate can receive the same kind of escort for their political campaigns.

And that it does not matter that any safety concerns are being generated by Wright’s campaign to begin with, or even that they exit their jurisdiction to operate in another county illegally disrupting their traffic.

While you normally see two, maybe three, motorcycles escorting a funeral in the county, the pictures in the formal complaint depict the political motorcycle fun run being escorted by a fiscally unethically excessive  five motorcycles and an SUV!

Schrecker commented in his complaint that, “I have tried other avenues (referring to the District Attorney’s Office) to bring about an appropriate response to this issue but feel that due to what can only be described as viciously protective partisan preferential treatment in this area that my requests for a fair and impartial investigation into this matter goes unheeded.”

It is a fact that both Wright and West are registered Democrats and campaign under the Democrat party label.

This is of great concern to the Republicans and Independents in this area. How can they be assured of fair and impartial treatment by West and the District Attorney’s office if West is unwilling to heed his oath of office in political matters?

At question; If it is clearly not legal for one political entity to use taxpayer public dollars for their personal campaign then how can it possibly be ethical for other political entities to illegally use tax dollars for their personal campaigns? It appears that DA West has some very serious explaining to do to the taxpaying voters in Cumberland County.

The Federal Hatch Act however is quite clear on the matter.

A State or local officer or employee, including a sheriff, may not –

Equally disturbing is the unethical and inherently coercive practices Wright is using on the deputies in his employ. It is inherently coercive for a supervisor to ask a subordinate employee to contribute to a political cause, the Hatch Act would prohibit an elected official from asking subordinate employees to help or contribute to his reelection campaign. Therefore, the Hatch Act would prohibit a supervisor from asking subordinates to volunteer for any partisan political campaign, political party, etc.

Inviting subordinate employees to a political fundraiser would violate two provisions of the Hatch Act. 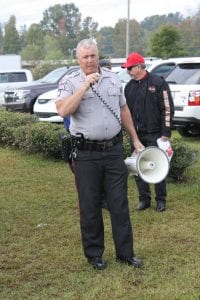 First, inviting subordinate state or local employees to a political fundraiser would violate the Act’s prohibition against directly or indirectly coercing, attempting to coerce, or advising other employees to make a political contribution, even if the supervisory employee does not expressly ask the individuals to contribute money.

Second, inviting subordinate employees to any political event would violate the Act’s prohibition against using one’s official influence or authority to affect the result of an election. Such conduct is inherently coercive, and violates the Act even if the supervisory employee does not threaten to penalize subordinates who do not attend or promise to reward those who do attend.

The complaint verifies that the Cumberland County Sheriff’s Office received $34,414.00 in a Federal Byrne Grant and $79,036.00 in a NC Crime Commission Grant (federal money) which along with other federal monies listed in their 2017 adopted budget makes the Sheriff’s Office subject to the Federal Hatch Act.

This is not the first time that the Cumberland County Sheriff’s Office has been alleged to violate Federal and State laws with regard to politics. See “Deputies Appear in Political Advertisement” for an example of a similar past occurrence in which a complaint was rendered that was also ignored by DA West where uniformed Cumberland County deputies and vehicles were used in a political advertisement.

Should Cumberland County voters elect a person for Sheriff or District Attorney who can’t even follow or enforce the law themselves?

And one wonders why the Cumberland County Commissioners have not demanded that the coffers be reimbursed the amount of taxpayer dollars illegally and unethically used by Wright in wages, gas, and equipment wear and tear.

We at TPTN Action News are very strong believers in civic duty and the right of the people to address their grievances to government in all its representations. We encourage you to call, or email, and make your feelings known about this to the unethical actors in this horrendous misuse of your tax dollars.

Or, if you prefer, you can call or email and have your name added to the complaint: