The following statements come from the men and women who work, or worked, right in the streets providing the various services and who speak for the majority of their co-workers and support staff as well as themselves. Furthermore, they are not to be confused with the administrative heads of these organizations who only speak for the organization administratively as an entity and not for the employees themselves.

Most of all these anonymous sources have just as much right to the freedom of speech without risking their employment as does any department head or newsmedia reporter.

We do believe it when Mitch Colvin says that it is his past that has made him what he is today. A father who wouldn’t pay his bills until he was taken to court. A mother, and possibly him, committing a felony “bait and switch” selling expensive caskets to grieving vulnerable customers then burying their loved ones in cheap caskets when they weren’t looking. What  despicable acts! Mitch Colvin is a man still engaged in criminal acts. All you have to do is look at how he conducts his business and why it’s on probation. Violations of state law! It doesn’t matter how others try to minimize it or press you to overlook it, Mitch Colvin is still committing violations of state law. Voting a convicted criminal into a position of authority, no matter how limited, over a city and its police is a recipe for disaster. Speaking for the majority of Fayetteville Police Officers, we can not and do not endorse Mitch Colvin for the position of mayor of Fayetteville. We have no confidence in him.

We, on behalf of the majority of N.C. State Troopers do not endorse Mitch Colvin. N.C. State Troopers can not in good conscience endorse anyone who so recklessly ignores the traffic laws of our state placing the precious lives of our mothers, fathers, children, babies and other loved ones in danger of serious injury or death. One charge may be a mistake but five speeding charges with one even being a 75 mph in a 35 mph zone is not accidental, it’s inexcusable. Speeding is not just a selfish decision, a bad decision. It can also very easily be a deadly one. We can not support anyone like Mitch Colvin who makes these kind of selfish bad decisions. Mitch Colvin sets a very bad example and would be very bad for Fayetteville as its mayor.

Political candidate Mitch Colvin shows a complete and frequent disregard for the laws of our state which serve to bring order and enforce responsibility of our state’s drivers.  We assure you, the major majority of N.C. DMV enforcement officers, examiners and agents do not endorse candidate Mitch Colvin for mayor of Fayetteville. Our state’s motor vehicle laws are necessary to protect our citizens from bad drivers through testing and to make sure that drivers have the necessary funds to fix your vehicles and pay your medical bills in the event of an accident. This is why a driver’s license, current registration/license plate and current active insurance is very important. Any person like Mitch Colvin who willingly chooses to snub and ignore our laws does not demonstrate the appropriate judgement necessary to hold a political office. 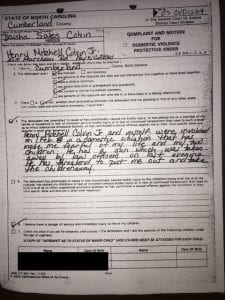 We see women and children on a daily basis who are devastated by abuse and abandonment and forced expulsion into homelessness. On behalf of the majority of the advocates of women and children in the Fayetteville area we can’t possibly support or endorse anyone who has committed violent acts against a woman placing them in fear for their life. While we do not endorse candidates as a rule we especially do not endorse any candidate with a history of domestic abuse like Mitch Colvin which is exemplified in the DVO Request 03CVD1264. We must support as voters only those candidates who believe in family unity and support, and practice the nurturing positive treatment of women and children.

Bewilderingly, a Fayetteville Observer editor wrote an article attempting to defend mayoral candidate Mitch Colvin, his criminal acts and heinous abuses of others.

Mayor Nat Robertson and some of his surrogates have been quick to say his opponent, Mayor Pro Tem Mitch Colvin, is unfit because of a criminal record and business sanctions levied by state regulators…Our conclusion: It’s a pretty normal group of people, whose lives and problems very much mirror the constituents they want to represent…Several have had business problems and got behind in their taxes— a remarkably common problem…

The U.S. Census reported in 2012 that there were 13,904 businesses operating in Fayetteville, N.C.

The N.C. Office of Administrative Hearings reports only 44 cases for 2017 which equates to 0.32% [32/100th of one percent] of businesses in Fayetteville violating many different state laws, not just those that pertain to mortuaries or funeral service businesses.

Fayetteville Observer’s editor lied to you by stating that “Several have had business problems and got behind in their taxes— a remarkably common problem…” regarding Mitch Colvin and his business violations. It’s not common at all.

Does any of that disqualify him from serving as mayor, where he’d have the entire City Hall staff keeping up with official paperwork? Of course not, but that’s what Robertson has consistently suggested.

We at TPTN can find no instance of the Honorable Mayor Nat Robertson making any such comments or suggestions in any debate, forum or political speech.

TPTN, and numerous Fayetteville voters certainly have questioned Mitch Colvin’s past actions and the very important point of whether they do in fact disqualify him for the position of mayor.

Speaking for TPTN we certify that we have no more of a connection to the Honorable Mayor Nat Robertson than the Fayetteville Observer has with the convict Mitch Colvin. In fact, as stated on our “About” page:

TPTN, the web master, the server administrator, nor any TPTN authors are affiliated with any political party, political candidate, political PAC, political convention or political campaign organization other than the basic affiliations required to be civically responsible registered voters in the state and nation.

And just what makes the Fayetteville Observer think that it’s the responsibility of the staff of City Hall to keep up with Mitch Colvin’s business paperwork. That’s not their job and that would certainly be in violation of several rules and laws of this city and the state. Mitch Colvin’s official business paperwork is his problem, not the problem of City Hall staff and the taxpayers. And it certainly is not the job of Fayetteville’s City Hall staff to babysit a mayor!

In essence, the Fayetteville Observer staff has resorted to the unforgivable tactic of lying to their readership about the Honorable Mayor Nat Robertson and about the seriousness of Mitch Colvin’s criminal history, both past and current, in an effort to prop up their favored candidate Mitch Colvin.

So what we have here are liars supporting thieving woman abusing convicts.

From what we at TPTN can see, no one has demonized anyone. Actions have consequences and if any candidate feels demonized then is because they demonized themselves by their very own actions.

A responsible voter reminding other responsible voters of a candidate’s criminal history and despicable abusive actions towards women and children does not in any manner make them mudslingers. For it to be mudslinging it would have to be untruthful allegations or at the very least unsupportable allegations.

In conclusion, we as voters have an obligation to “Drain the Swamp” and put into office those who are morally and ethically sound.